The joke's on us 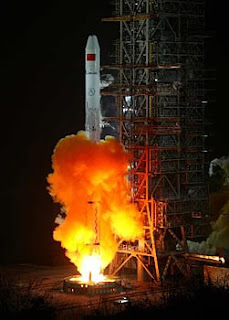 It's a while back since we had a look at the European vanity project, aka Galileo, but like everything the euroweenies do, it doesn't go away just because you're not looking at it.

What brings us back is a highly entertaining reversal of fortunes, where the vainglorious ambitions of the Euros seem to be colliding with the inscrutability of their former strategic partners, the Chinese.

To appreciate what turns out to be a huge irony, we have to go back to 2001 when the Galileo system was in its early stages of going nowhere, and the US started raising the alarm about possible interference with the established US GPS system.

This was more or less resolved in 2004 and eventually, by June 2007 a deal was cemented whereby the two systems would be compatible and could therefore share the sky in some sort of harmony.

Meanwhile, also to the consternation of the Americans, the euroweenies were doing a separate deal with the Chinese, bringing them on board as "development partners" for Galileo, with the very real risk that they would exploit the technology for military purposes.

The concern had its effect because, despite – or so they thought – the euroweenies milking them for €200 million for their stake in the project, the Chinese were frozen out of the management team which was to run the system.

In what now becomes a deliciously convoluted story, the Chinese meanwhile decided to develop their own Beidou navigation network from a regional system to a fully functional global network, comparable with GPS, Galileo and the Russian Glonas. That, as Taylor Dinerman pointed out in 2006, would raise exactly the same compatibility problems that had confronted Galileo and GPS, with potential interference between systems.

Now, as Asia Times and, more recently, Dinerman report, the Beidou system – now known as Compass - is steaming ahead, with the Chinese aiming to make it fully functional by 2015.

In setting up their system, Chinese representatives have informally resolved with the US potential problems with co-ordination of frequencies. Recognising the status of GPS as a "legacy" system with a prior claim to its frequencies, China is prepared to respect the status quo and not interfere.

Not so with the euroweenies, however, where compatibility issues between Compass and Galileo most definitely have not been resolved. With China's schedule now edging ahead on the launch stakes, the inscrutable ones are taking the view that it has equal rights to pick its operating frequencies as do the Euros.

The result is that Compass could end up interfering with Galileo's high accuracy Public Regulated Service (PRS) signals. This is the part of the system which will be available on subscription and will also be used for military purposes - not that it's a military system, of course. But, with the Chinese system up and running, PRS will be pretty much useless for military purposes unless China allows access to the frequencies.

Not content with this, the Chinese are also seeking to build into their system some "product differentiators" - enhanced capabilities and unique signals and/or services – which will give them a competitive advantage over Galileo and GPS. With their eyes on the lucrative Asian applications market, that will leave the poor old Euros decidedly in the cold.

The combined effect of these various initiatives is set to create even more difficulties for the Euros than they have experienced already, further diluting the attraction of a system that has been struggling to get off the ground. To add insult to injury, the Chinese have also made good use of the €200 million stake with which they bought into Galileo.

Having acquired considerable technical know-how from the Euros on developing ground infrastructures for satellite systems – as part of the "partnership" deal - all but about €10 million has been spent on application development and ground infrastructure in China itself. This technology is now being seamlessly integrated into the Compass programme.

While the Euros might have been under the illusion that the Chinese would move away from the US GPS system and join with their anti-American tryst, China has never had any real intentions of joining in. It has always had ambitions for its own independent system. The Chinese have got far more out of the "co-operation" with the Euros in terms of technical know-how, system management and market access than they ever put in, and are now ahead of the game.

The ultimate joke – if your sense of humour takes you that way – is highlighted by Dinerman. The Galileo system was originally intended by Jacques Chirac to prevent Europe from becoming the "technological vassal" of the Americans. With the frequency conflict, it has now produced a situation where the EU is going to be subservient to the Chinese.

Reports, says Dinerman, have it that the Euros are "very angry". It's a tough old world out there, and it looks like it's not getting any better for their pet project. It would all be rather funny if it wasn't for the fact that the British taxpayer already has better than a £200 million stake in the damn thing and we are going to have to pick up a hefty chunk of the bill when it tanks. The Chinese may be laughing – not that they would do so in public – but it looks like the joke is on us.

As for the poor benighted Euros, Dinerman has the last word. "Decades from now," he writes, "it may be that people will see Galileo as having been a wise investment, one that gave Europe a valuable tool with which to assert itself on the world stage."