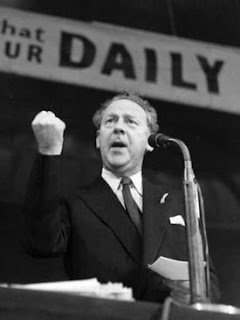 It was Hugh Gaitskell in his 1962 speech, offering a devastating indictment of the idea of Britain joining the EEC, who sardonically referred to the "top people". It was they who would have it that they were the only people who could really understand the issues … "the classic argument of every tyranny in history".

He was alluding to an advertisement then current, which proclaimed that "the top people read The Times", a not altogether hidden reference to the fact that this newspaper was one of the cheerleaders for the project.

Looking at today’s leader in the same newspaper, it is evident that nothing has changed. Under the Orwellian title of "The open society," it pedals exactly the same woolly thinking which spawned its enthusiasm those forty years ago, indicating that the "top people" have not stirred their brain cells since.

The paper argues that the "big question" of the modern age is not Left versus Right but open versus closed, immediately leaping into a theme that must seriously be worrying the "top people". "The financial crisis must not be used as a cover for economic nationalism," it sternly declares.

Thus it observes that:

In the maelstrom of the financial crisis it seems, at times, as if all fixed positions have been abandoned. The temporary expedients required to deal with a credit crunch, the like of which the world has not seen for 75 years, have altered the course of arguments about the relationship of government to markets, the appropriate level and type of regulation. But not everything solid has melted into air. There is a genuine danger that the financial crisis is used as a cover under which a revived economic nationalism is smuggled back.

We then see a paean of praise for the creed of the tranzies, where the paper holds that the "great policy triumph of the past thirty years has been the gradual triumph of free trade and open economies over tariff walls, protectionism and variations on economic autarky." The result, it tells us:

… has been the most extraordinary growth in prosperity in all of human history. And neither has this prosperity been confined to the rich economies. More people ceased to be poor in the latter half of the 20th century than in any 50-year period previously. The emergence of China and India promises that the next half-century will be, on that score, even better.

And then the hidden message, straight out of the EU hagiography:

In the same period there has been peace in Europe, a continent that had known constant conflict before. The same terrain on which two bloody world wars were fought is now covered by a single market in which free nations trade with no regard for national borders. Across the world, the West's greatest export has been not its goods but its best idea - democratic representation. There are still very many tyrannies in the world, but far fewer than there were, and only the most egregious do not feel the need to clothe themselves in the rhetoric of liberal democracy.

Amazingly, it then blandly informs us that, "Prosperity has a tendency to beget democracy." The linkage is subtle, but undoubtedly deliberate, reflecting the mindset of the "top people". It entirely ignores the single fact that, over the decades since we have seen this "extraordinary growth in prosperity", we have also seen a dangerous and continuing erosion of democracy throughout the Western nations. Certainly in the UK, there is no longer any meaningful democracy.

But the tranzie creed pours out. Says this august voice of the "top people":

Much recent political debate in the advanced industrial economies has centred on the way that international events disrupt long-established social ties. The objection to the free movement of labour is that it tends to dissolve settled communities that have been built around a particular skill or industry.

The argument is not frivolous - but it is misguided. Small communities can be oppressive as well as sustaining. Social ferment in the United States has been stimulated by huge advances in racial integration and the opening of institutions - the armed forces, the professions and now the presidency - to a far wider pool of talent.

And so we get to the conclusion, the message the "top people" want to convey:

The important political point is that these debates straddle the old political division of Left versus Right. The new division in international politics is between those who wish their nation to be open to the world and those who wish to close the door and turn away. A time of crisis is a difficult moment to stress again that the open economy and the open society are the best options - so all the more reason for doing so.

This seductive creed, however, misses the one central point. A society, by definition, is closed. It is a group of people who broadly share the same values, the same loyalties, the same aspirations and the same sense of belonging. There is no such thing as an "open society". Those who advocate it are seeking the destruction of the very thing they claim – or appear – to support.

But it is these siren voices which dominate what passes for thinking amongst the "top people". Their twisted values and their detachment from the very fundamental values of human organisation are why they support, and will always support the European Union.