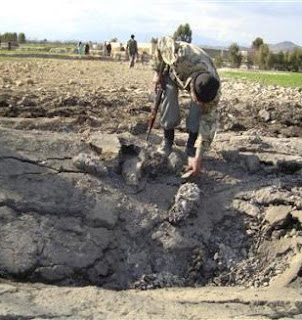 In a change of pace, it is worth looking around at the wider world and casting an eye on what is still something of a "forgotten war" – our military expedition in Afghanistan.

If it is largely forgotten, that is because the anally-retentive MoD has still not got to grips with the basic idea that, to retain interest in a long-running and complex campaign, it is vitally necessary to offer a "road map" telling people very specifically what it is trying to achieve, and then to offer a narrative, imparting some sense of continuity and direction to otherwise disparate military operations.

The same faults were evident in the MoD's coverage of the Iraqi campaign, although there the obfuscation was undoubtedly deliberate, to divert the public gaze from quite how disastrously ineffective the military effort actually was.

Given the same basic lack of information, the suspicion must be that the MoD is playing the same trick, a suspicion given sustenance by a report today that has a "leading US military expert" predicting that the war "could be lost by summer" – without, that is, changes in counter-insurgency strategy

The expert in this case is Col John Nagl, who is consulting the US government as it conducts four separate policy reviews on Afghanistan. The fear – which was also articulated in the context of Iraq – is that Afghanistan will become the new president's Vietnam. It will not. Afghanistan is not Vietnam, but the sentiment obviously suggests that the endeavour is at risk of bogging down.

The change needed – we are told – is more troops (with a further 30,000 US troops soon expected) and the adoption of the approach that worked well in Iraq. US forces will concentrate less seeking out and killing insurgents and instead will follow a "clear, hold, build" strategy designed to consolidate gains and prevent captured towns falling back into enemy hands.

Col Nagl is saying that the gains made by the Taleban over the past two years need to be reversed by the end of the traditional fighting season, around late September or early October, or else the Taleban will establish a durable base that would make a sustained Western military presence futile.

But he also believes that a change in military tactics urgently needs to be accompanied by a "civilian surge", which will clarify the roles and goals of international agencies and governments trying to steer the impoverished country's development.

This all sounds very good, but while Afghanistan is not Vietnam, it is not Iraq either. The danger is in thinking that because a strategy worked in Iraq, it will also work in this theatre. It will not.

The crucial differences are that Iraq is significantly more urbanised than Afghanistan, had a better infrastructure – particularly the road network – and, of course, had oil – and sea access. Afghanistan is still mainly "rural" with 80 percent relying on agricultural activities, although there is massive urban drift which is also creating problems - and to allow them to get to this stage has been criminally stupid. Most importantly, the infrastructure is extremely poor and in many areas the roads are barely passable.

The problem for the coalition forces is that, with such a widely dispersed population – in a vast area (Helmand is four times the size of Wales) - even the additional troops proposed will not permit much in the way of "hold", much less build.

With the Taleban being able to pick and chose its targets, it can chip away at civilian reconstruction teams, forcing an increasing amount of the resource to be expended on force protection and security. This, in the end, becomes self-defeating.

The essential requirement, therefore, is to prioritise the reconstruction, putting the effort into where the greatest "added value" can be gained. This, in a nutshell, amounts to road-building and repair, and the provision of electricity.

But, since the force protection effort required is so great, you end up with a situation where as many forces end up in protection duties as are doing the work. The only answer, therefore, is to have "self protecting" units which, effectively, means that the Army has to do the reconstruction.

Until the politicians get their head round this – and are able to resolve the bickering between the agencies involved - the counter-insurgency is going nowhere.

Speaking of politicians, Milband has also been putting his oar in, and he too is talking of troops stuck in a "stalemate". His comments come on the back of a poll of 1,500 Afghanis commissioned by the BBC and two other international broadcasters. It has found that only 40 percent of Afghans still believe their country is heading in the right direction, compared with 77 percent in 2005.

Miliband thinks this figures is "realistic" and he is probably right. Examining the metrics of the reconstruction programme, it is either going backwards or failing to get even near key objectives. The Nato forces, in the subjective terms by which they are judged by the Afghanis, are achieving nothing.

Miliband also admits that the Taleban have managed to create "a strategic stalemate in parts of the country through their use of improvised explosive devices". That, of course, comes as absolutely no surprise at all – something which happened in Iraq, and something we and many others were predicting would happen three years ago. Yet the major and highly necessary force protection package was only ordered last October and it will only start coming on-stream next year, after the next fighting season.

The problem with the IED, of course, is that it hampers tactical mobility and, in a country the size of Afghanistan, this has a devastating effect. Without protection measures in place, extra troops are simply cannon-fodder, adding to the growing toll of casualties. The expected "mini-surge" from the British could, therefore, simply end up as a mini-surge of coffins coming the other way.

There are many other intractable problems, but the main need for the forces in theatre is to show some permanent progress which, so far, they have not been able to do. The activity is more akin to mowing the grass than it is rebuilding a nation.

On all counts, therefore, the pessimism from the different quarters is justified. In some of those quarters, there is as understanding of what needs to be done, but a way of adapting the mechanisms to achieve a result has so far remained elusive. And, of course, the Army sitting on its hands for three years, resisting the purchase of specialised protected vehicles while it held out for FRES, has not helped at all.

The danger is now that we will get into the same rut that we found ourselves in Iraq. Being unable to force a decision, the British moved the goalposts, redefining their objectives in terms of what looked achievable. And when those too turned out to be unachievable, the spin machine got going to create an illusion that failure was in fact success.

Already, there seems to be some sign of that happening all over again, with the British understood to be pushing for the "Afghanisation" of the Afghan war, seeking to persuade Washington to drop the original aim of creating a fully-fledged democracy in Afghanistan. Instead, it want the US to embrace "a reasonable objective, in a reasonable time-frame, with a reasonable prospect of success."

Bush nearly fell for that one, but changed his mind and rejected both the siren voices of the British and the defeatist advice of the Iraq Study Group. But a new, inexperienced President might just be gullible enough to buy the line and abandon Afghanistan on the basis of a flawed analysis and wishful thinking.

The ultimate test, though, is whether either the British or the US population will care enough to protest. To judge from the Iraqi experience, the British will be silent and the siren voices will prevail.