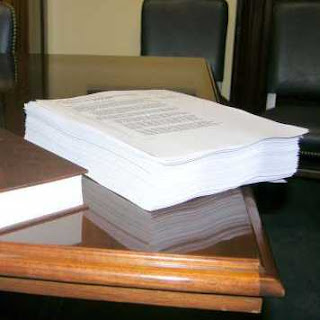 A thoughtful piece finds its way into The Washington Times today on the lack of thought given to regulation.

Written by Richard W Rahn, a senior fellow at the Cato Institute and chairman of the Institute for Global Economic Growth, he takes on "the ill-thought out proposals to increase regulation of the financial industry, both by politicians and people who should know better."

The frightening thing, he says, is that many of the same intellectually and (alleged) financially corrupt politicians whose actions directly helped bring on the present financial crisis, have now been put in charge of the hen house and are tasked with "making reforms."

Rather than acknowledge that their earlier poorly thought out "reforms" caused many of the current problems, they and the so-called "Group of 30" financial experts advocate expanding destructive bank regulation to healthy parts of the financial industry.

Thus writes Rahn, those who are incapable of thinking through the consequences of their actions (like drunken teenagers with car keys) are likely to make matters worse rather than better, which characterises all too many of the Washington elite.

And so it continues, an American perspective which could so easily be transplanted over here. The British government, with other European governments, alongside the EU and the trans-national organisations, having made one unholy mess of the financial regulation system are now the very same people who are charged with cleaning up the mess they have made.

Rahn's comments are guided by his previous experience as a financial regulator and he writes of being keenly aware that "regulation can be more destructive than beneficial."

Regulation, he says, adds to systemic risk in that it reduces market discipline when people think the government is "protecting" them. Regulation favours large over small firms because the costs are more easily borne by large entities, and this in turn causes more industry concentration than is desirable (resulting in the "too big to fail" syndrome).

He adds that which is well known to EU Ref readers, that regulation often impairs innovation by driving up costs and often adds costs not justified by the benefits, and all these additional costs are ultimately borne by consumers in higher prices, which mean a lower standard of living.

Thus he concludes that the current rush to regulate, without calmly and adequately thinking through the full ramifications and likely costs associated with each new regulatory proposal, is likely to end in another round of financial disasters.

This is all good stuff, but it is nothing new. Neither is the recent report on regulation from Open Europe which congratulates itself on publishing one of the most comprehensive studies ever undertaken of the cost of regulation introduced in the past decade in the UK.

Actually, it isn't that comprehensive. It was done better and longer by no less than the EU Commission which published a report in 2004 which came to roughly the same conclusion – that (unnecessary) regulation costs about 12 percent of GDP – a massive sum amounting to about £6 trillion throughout the EU, and about £140 billion a year in the UK.

The report was covered at the time on this blog and here we are over four years later coming up with the same stuff –the Bruges Group having done a similar study recently.

From the "shock-horror-probe" phase of "Gosh! Regulation costs a lot of money and does a lot of damage!", which has rather been done to death, perhaps it is time to explore why governments around the world insist on launching an endless torrent of regulation when even the progenitors are aware of its damaging effects.

Here, Open Europe are immediately stuffed, as the primary purpose of EU regulation is not regulation per se. It is a means to an end, the end being political integration, the mechanism being common regulation. Asking the EU to stop regulating is like asking a crocodile to turn vegetarian.

However, we do get a glimmer of sense – but only a glimmer – from Simon Wolfson, Chief Executive of Next plc, who writes the foreword for the Open Europe report. He opines, apparently sensibly, that one of he steps necessary to make progress is for the mindset of government must change. "Policymakers," he writes, "must accept the radical idea that the law should only be used to regulate our endeavours where there is an overwhelming case for state intervention."

The sense is only apparent, however. The point he misses is that, in a complex society, regulation is a vital necessity for the good functioning of that society. One part of the problem, is not so much the fact of regulation, but the quality (as in poor) of regulation. Regulation, in itself, is rarely bad in principle. What causes most of the damage is poor regulation.

All this, of course depends on getting the philosophy of regulation right, and it is here that any intelligent discussion should be focused, trying to get our legislators to understand what they are doing, and why.

This may be a forlorn hope but it would at least address the heart of the problem. Simply bleating about how terrible and costly regulation is seems to me to be somewhat unproductive.