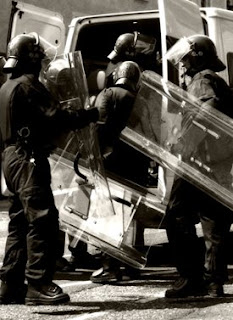 According to a YouGov poll, with details via the Press Association, more than a third of voters believe the Army will have to be brought in to deal with a "summer of rage" on British streets as the recession bites.

The poll has been commissioned by the Prospect magazine, which has found that 37 percent thought such "serious social unrest in several British cities" was certain or likely. A slim majority (51 percent) disagreed.

This may be an attempt at wish fulfilment on the part of those who believe violence will erupt – or would like to see it happen. Polls on such subjects are even more unreliable than usual, and what people think might happen is no guide as to whether it will.

However, you can be fairly well assured that there will be plenty of recruits from the Washwood Heath district of Birmingham, should the call come. It would be sadly ironic if the Army was called in to restore order, driving in MAN trucks.

The manufacturer of these trucks, MAN Nutzfahrzeuge Österreich AG, has an interesting history. Originally, it was part of Steyr-Daimler-Puch, which was founded in 1934 out of the merger of Austro-Daimler-Puchwerke AG and Steyr-Werke AG. Then, in 1941, it became part of the "Reichswerke Hermann Göring" empire, producing vehicles, armaments and also manufacturing aircraft engines under licence from Daimler Benz, using slave labour for its workforce.

After the war, it reverted to its original name, building up its truck business which it then sold off. That became Steyr Nutzfahrzeuge AG which was absorbed by the Germans to become the Austrian part of the MAN-Nutzfahrzeuge group. Its workers are now happily employed producing trucks for the British Army.

With such an interesting and varied background, it is only right and proper that these trucks should be used for such important work as maintaining the Queen's peace. Arbeit macht frei, as someone once said. Certainly worked for the Austrians.

And if you think that is in bad taste, this company is the linear descendent of a company which during the war was owned by a Nazi gangster and which used slave labour from concentration camps. This is the company which is now building trucks for the British Army which, as our previous story shows, directly displaced British workers and led almost directly to the collapse of LDV.

By all means, we can forgive the Austrians their past, but not at the price of their producing equipment for the British Army which we could and should have produced. This is especially so when it is to be used by soldiers in a war zone where the Austrians are notably absent, yet are profiting mightily from it - all funded by the British taxpayer who will have to pick up the dole payments of our displaced workers.

That, to me, is in extremely bad taste. It is about time some of our politicians woke up and smelt the coffee.