A price worth paying for our success 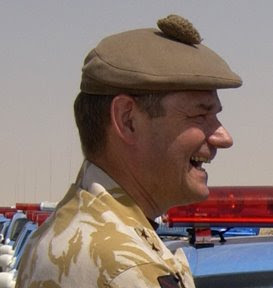 That is the view of Lieutenant-General John Cooper, expressed in The Times today, referring to the death of 179 troops in the abortive campaign in Iraq. Britain, he says, deserves its share of the credit for what has been achieved, and its achievements vindicate the losses suffered by its troops there.

There speaks a man of such monumental ignorance, or stupidity that one wonders how it is that he is let out on his own. That he has risen to the elevated rank of Lieutenant-General demonstrates with utmost clarity that very little has changed since the Boer War – and even before. Stupidity is no bar to holding high rank in the Army.

For sure, Gen Cooper is right when he says that, "When our mission ends in Basra, we will be leaving behind a city that is in far better nick than it was when we arrived in 2003. It's more stable and the people have faith in, and a vision for, the future." But, despite the brave – at times desperately so – actions of the troops on the ground, that happy situation has very little to do with the British Army.

Apart from anything else though, Cooper displays a myopic xenophobia – or the insularity of his breed – in ignoring the deaths of thousands of innocent Iraqis who lost their lives under the British occupation. Their deaths were as a direct result of the failure of the Army to honour its obligations under international law as an occupying power, "to restore and ensure as far as possible public order and safety".

There are many reasons why the Army failed. Some of them were entirely out of its control and little blame thereby attaches to those on the ground who put their lives on the line trying to do the impossible. But for the likes of Cooper then to claim a "success" and thence to so airily to equate the loss of British life as a reasonable exchange – which is what he is doing – is utterly intolerable.

One is tempted to scream: "You failed, Dickhead! Admit it!", except that such mild words could hardly begin to convey the depth of the despair and frustration.

Amazingly, Cooper, in his cloistered, smug, self-referential little world believes that, "Our losses will be vindicated in the same way our losses in Northern Ireland were." He adds that, "Part of Service life is to make sacrifices. We accept it and live with it. We don't wring our hands but we never forget those we leave behind."

He has, already, forgotten the corpses of the Iraqis he leaves behind and of the 179 killed, 136 in action, one has to note that Gen Cooper was not the one making the sacrifices. It is all very well to applaud other people's sacrifice when, on their backs, you are making quite a comfortable living. Let's see now, the starting salary for a Lieutenant-General is rather more that £122,000 a year – plus a comfortable pension and perks. Not much sacrifice there!

The stupidity of the man is highlighted by the fact that he was in command of the Multinational Division Southeast, encompassing Basra, in 2006, before the "deal" was negotiated to allow the last 500 British troops in the city to leave in 2007 without being attacked. "In 2006 there was increasing violence and there was a fear that it was going to slip into civil war, although this proved unfounded. But it was a tough time," he says.

This proved unfounded?! There was a civil war going on. The militias were openly bearing arms in the streets and setting up military parades, the Mahdi Army – and its many splinter groups – were also taking on the Iraqi Army and the police. Basra was becoming a war zone, punctuated by a series of running battles.

Sectarian violence had continued unabated and the process of creating an Islamic independent state was continuing apace, with the murder of "westernised" women widely reported. The city was descending into anarchy. Even the attacks on the last British base were to recommence. It was not until Maliki launched Operation Charge of the Knights that the city was recovered.

Tucked up securely in their base, however, the British seemed – as always – to be oblivious to events. Gethin Chamberlain, then writing for The Sunday Telegraph observed that British forces were getting their information from local newspapers and from the Iraqi army, although one battalion was isolated inside the city and the other was in training outside.

To all those outside the foetid little world of the British High Command, there was definitely a sense of Basra being a powder keg waiting to blow. A final all-out battle was seen as inevitable. Despite this, the Chief of the Defence Staff, Jock Stirrup, chose the fifth anniversary of the invasion, on 20 March, to publish a "tribute to the sacrifice and achievements of the British forces". He then wrote:

More and more people in Basra are turning from violence on the streets to politics. Not all of them, and not as quickly as we would like. But those who continue to practise violence are being dealt with increasingly effectively by the Iraqi security forces.

The British commander was now Maj Gen Barney White-Spunner. He too thought the situation inside the city was getting better. "No one is saying it is ideal," he said, "But the indications are that the militias are losing some of their influence, and there are divisions appearing among them." The "divisions" were not among them – the 10th and 14th Divisions of the Iraqi Army had not yet fully deployed. Stirrup and White-Spunner both were in the land of the fairies.

After the failures of the Boer war Kipling wrote, "Its a difficult thing to admit it, but as a grown-up nation we should; we've had a hell of a beating, it will do us no end of good." What Cooper demonstrates though is that, in common with his superiors, he is in the land of the fairies. Despite his exalted rank, he has yet to grow up.

Such men are dangerous.