This man is insane 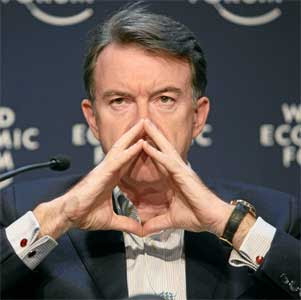 We are talking here of The Lord Mandelson and one hopes that is the case. It could be much worse than that.

Rather helpfully (to Lord M), it is going to take three to four months, and be conducted by a fine, upstanding, totally independent figure - Mark Gibson, a senior official in Mandelson's own department, formerly private secretary to Lord Heseltine. Even now, we know where this is going.

By such sleights of hand, however, is the central issue skirted. The anger of the displaced workers that we have seen so recently had not been about a lack of productivity. They have been complaining that skilled men have been refused jobs which have been given to foreign workers.

There is a great deal more to the issue than this, and I suspect that it may be long time before we get to know what really has been going on – if ever. But if Lord M thinks that this is going to address the problem, then he is insane. Either that, or it is a gigantic smokescreen. But then if he thinks that is going to work, he is also insane.

This is an issue which is not going to go away, and no amount of finessing will make that any different. Sentiment is not going to be helped at all by this news in The Daily Express today which reports that foreign workers "are pricing out British builders" by working for as little as £2-an-hour. Desperate migrants, the paper says – often in the country illegally – are asking just £25 for a 12-hour shift, undercutting British tradesmen who are struggling to find work.

Try as they might, no one is going to be convinced by the likes of this, with Acas happily finding that the use of "foreign workers" at the Lindsey oil refinery were not paid wages that undercut British employees.

This is not about fact – it is about perception, and even prejudice. But it was Brown who lifted the lid off a can of worms with his cry of "British jobs for British workers," and he should not be surprised if people take him at his word.

The Acas finding is going to be seen as a "whitewash", which will simply reinforce the perception that British workers are being stiffed out of jobs. Little Lord M is going to have to do a lot more than set up a cushty little review to overcome what is going to become a running sore.