We can't have "perceptions" 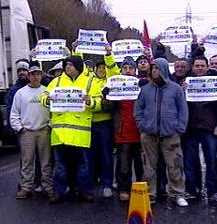 Breaking a recent vow never to listen to BBC radio, I took the time out to enjoy reporters, commentators and sundry others twittering on about the foreign workers' dispute, noting how completely out of their depth they all were, especially the MPPs, who seemed to have little idea of what they were talking about (so what else is new?).

After all these years of ignoring the EU, pretending it wasn't happening, and now it is leaping up and biting them on their hairy a***s, and they don't know what to make of it. Thus we get Alan Johnson, the Health Secretary – and former union leader – blathering on about the need for "fresh directives" in order to make it clear that British workers cannot be undercut on their own turf.

This is backed by the Unions who also want "a new EU directive" to overturn the Viking and Laval un Partner cases, clearly failing to understand that all the ECJ was doing was clarifying that which has been in the Treaty of Rome since 1957.

What these poor darlings actually want, therefore, is not so much a new directive as a new treaty – which, of course, they cannot have. Thus, one suspects they are thrashing around looking for a way our of an intractable problem, having to confront that looming elephant, which is getting more visible by the day.

Also great fun is watching the great europhiliac Peter Mandelson squiriming, trying to explain to us that its "alright chaps" – you can go and get jobs in Italy. "Let them eat cake", doesn't even begin to measure up to that piece of hauteur.

Paul Kenny, leader of the GMB was less than impressed, spitting with rage, declaring that, "For Mandelson to come out with the Norman Tebbit line to get on your bike and go to Brussels is outrageous."

Then we have the Lord M telling us that us that there is "no problem" with EU rules as Total – owners of the Lindsey oil refinery – have provided "full reassurance" and dispelled the "perception" that Britons had been discriminated against. Planet, which, on?

The revered Gordon isn't having an easy time of it either. Saddled with his fatuous slogan, "British Wogs for British Dogs" … no, sorry that was the BNP slogan – "British jobs for British workers," he is now telling these ardent jobseekers, looking for rapidly vanishing stock of British jobs, that these "wildcat strikes" are "not defensible". They were "not the right thing to do," says the man who has already given most of his job to foreign workers, yet still gets pay increases.

There is even more merriment to be had from the Lib-Dums warning that challenging EU labour laws would be a "huge, self-defeating step too far", as they desperately seek to prevent their darling EU gurgling down the plug hole as British workers finally get wise to the joys of being so communautaire. The blue flag is about to follow the same route as the red flag, in that deliciously irreverent song.

Needless to say, pretend eurosceptic "two jobs Willy" Hague, wants it both ways. The Conservatives "strongly support" the free movement of Labour within the EU – presumably he is not talking about the Labour Party, as he is more interested in one-way movement there. "In Europe and screwed by Europe", wasn't it?

Meanwhile, when they've finished devising new and interesting things to do with blue flags,today up to 1,000 construction workers at Sellafield may be telling Mr Brown what he can do with his slogans, and thinking up some of their own. Some might even offer suggestions for doing new and interesting things with all sorts of objects. Why stop at flags?

However, they might be beaten by the rush of global warming we have been having lately, which might actually stop them getting to work in order to stop working.

The last word, however, must go to Sadiq Khan, the Kommunities Minister, who is telling us: "What we cannot have is the perception that foreign companies are abusing the rules of the EU to penalise British workers who have the skills to do the job."

We most certainly cannot have "perceptions". Whatever next?