The blind shall lead the blind 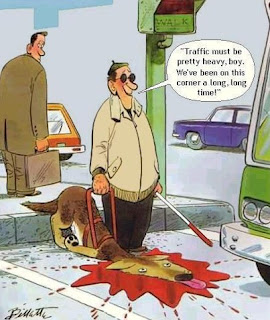 Weary one is with these lame-brain johnny-come-latelys who dive into a subject, half understanding it, and then pontificate mightily from a position of almost total ignorance.

We have another one here, who calls himself Dan Lewis, research director – no less - of the Economic Research Council.

He is trilling on about "The rise of the EU Quangos," trotting out the cliché that "that imitation is the greatest form of flattery," and that "the EU's newly acquired taste in aping Britain's growing quango state is a compliment we could well do without."

This is based on a flawed thesis that gets its own airing here. It rests on the basic misunderstanding of the nature of the Quango, easily revealed when you unpeel the acronym and remember that it stands for Quasi-non-governmental organisation. In other words – no, in the exact words - they are non-governmental.

Lewis, apparently unaware of this, then goes to twitter on about EU agencies which "duplicate work done elsewhere, crowd out private sector activity and add very dubious value." Probably the most indefensible of these bodies, he says, is the European Defence Agency (EDA).

Before going any further, we can immediately see the difference. He is talking about agencies. These are not non-governmental, they are governmental bodies – they are part of the government and they act on its behalf – no less so than the EDA.

Further, in the European structures – as is explained on the EU site, there are several different types of agency, five to be specific, each with different functions. Even to group them together as one, much less call them "quangos" is an utter travesty.

More to the point, this little dimwit clearly does not understand what is going on. He bleats about the "Education, Audiovisual and Culture Executive Agency", "where you just wonder that if they were to disappear tomorrow, unless you work there, would anyone actually notice?"

In so doing, he glosses over the word "executive", as in Executive Agency. This is a body "established in accordance with Council Regulation (EC) No 58/2003 (OJ L 11, 16.1.2003) with a view to being entrusted with certain tasks relating to the management of one or more Community programmes". In other words, it is part of the EU governmental structure.

Now, you can argue validly that these agencies are dangerous, that they have too much power and that they, like the EU, should be abolished for that reason – as Booker and I have done (another blast here), but to bleat on about "quangos" is totally, comprehensively and completely to miss the point.

Nevertheless, he grinds laboriously to a conclusion, that the "quangos" both in the UK and EU "represent the soft underbelly of the oversized state." From there, we get the stunning recommendation that: "It's high time to start cutting them down to size." The man is a total (insert word here). In the EU they are the state. They are integral to the EU and are central to its functioning.