A summer of anger? 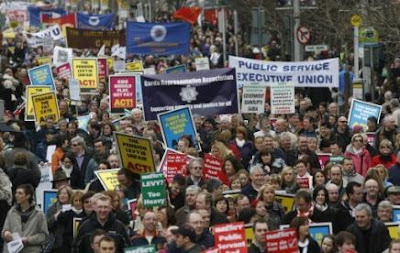 The issue is "intra-company transfers", through which means international companies can transfer their staff to the UK for supposedly limited periods of time. However, the number of workers taking advantage of this system has increased by almost half in four years. Some 48,010 applications for intra-company transfers were approved in 2008, up 47 per cent on the 32,770 given the go ahead in 2004 and the equivalent of 131 arriving every day.

These figures, says the paper, will further fuel the row over foreign labour as the recession deepens and comes ahead of more damaging immigration and population statistics to be published tomorrow.

Much as the political establishment wants to ignore this issue, numerous stories are doing the rounds, one doing the e-mail circuit at the moment being a report from The Liverpool Echo. This tells of foreign workers being brought in by coach because "a company can't find the skills it needs among the local workforce."

Where this falls apart is that the company is the ship-fitting contractor Trimline, and it is claiming that cannot find skilled ship workers - in Birkenhead.

To add insult to injury, the work is on a Royal Fleet Auxiliary vessel at the Cammell Laird shipyard, paid-for by the British taxpayer. Polish workers are being bussed in to do the work, despite there being hundreds of skilled British shipworkers left idle after recent completion of major MoD contracts.

A number of media outlets are therefore picking up on the same vibes we reported in our earlier piece, the latest being Reuters. It is recording that the police are warning of a "summer of rage" with mass protests over the economic crisis, the first being the G20 summit in April.

The Met Police are well used to dealing with this sort of thing, and the likelihood is that any disruption will be the usual "renta-mob", using the current unrest as a cover for that which they do anyway. They do not need an excuse. And, with this being so well flagged-up, it could amount to nothing very much.

However, The Daily Mail is also on the case, and it too it picking up the vibes. The concern is that "law-abiding middle-class individuals who would never have considered joining demonstrations may now seek to vent their anger through protests this year. "

The point that has perhaps escaped the paper – and the police who have made the comment – is that the middle-class is no longer "law-abiding". Submerged under a tide of New Labour laws and forever being picked on by petty officials looking for easy targets, few have avoided brushes with the law. There is, therefore, an underlying reservoir of resentment and contempt which brings a new dimension to this situation.

This may result in developments which are not as clearly flagged-up as the police would like to believe. When people get really angry, they do not always follow the script.