For all the fine talk … 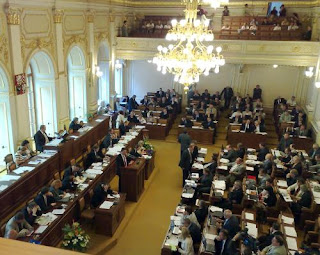 … the lower house of the Czech parliament yesterday voted to ratify the constitutional Lisbon treaty, with a majority of 125 votes cast to 61 against. It still needs to be approved by the upper house, where it needs a three-fifths majority, and then Klaus has to sign the ratification papers.

The vote was shepherded by europhile prime minister Mirek Topolanek, who seems to be about as popular in the country as Gordon Brown is here. Not ratifying the treaty "would bring us nothing," Topolanek told the MPs before the vote, adding that "even he" was not "rejoicing" over every aspect of the treaty.

Deputy prime minister Alexandr Vondra churned out the usual platitudes – usual because they seem to be part of the universal vocabulary of the pols – saying: "It's a responsible step preceded by a thorough, democratic debate". He wants the Senate to follow "as soon as possible".

I must say, it's a jolly posh parliament (pictured), which just goes to show that environment isn't everything. You can make crap decisions no matter what your surroundings, as indeed we see in Westminster so often, when the MPs are actually there – which seems to be something of a rarity these days.