Another day, another prediction 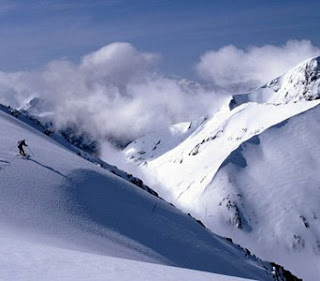 From the Met Office that told us that the summer of 2008 was going to be the warmest on record, we have yet another of their wonderful predictions.

According to this august source, or so we are told, the Scottish ski industry could disappear "within decades" due to global warming.

Despite the fact that the country's five resorts are currently enjoying exceptional conditions after heavy snowfall in the Highlands, climate change "may mean" they have less than 50 years of skiing left.

Alex Hill, chief government advisor with the Met Office, said the amount of snow in the Scottish mountains had been decreasing for the last 40 years and there was no reason for the decline to stop. He added: "Put it this way, I will not be investing in the ski-ing industry. Will there be a ski industry in Scotland in 50 years' time? Very unlikely."

I don't know what it is about the warmists, but they seem to have it in for skiing – maybe it’s the killjoy streak in them, a modern version of the Puritans. But last May they were having a go at the Alpine ski resorts, predicting many of them were finished – just before they were to enjoy record snowfalls.

The one thing about the warmists though – they never let duff predictions stop them. One might recall that, not so very long ago, they were predicting a five foot rise in sea level in 50 years. Another source was warning us that:

A predicted rise in sea level of one foot within the next 30 to 40 years will drive much of the Atlantic and Gulf shoreline inward by a hundred feet and some of it by more than a thousand feet, according to marine geologists. The environmental and economic consequences will be felt much farther inland.

Both those predictions, interestingly enough, were made in 1986, published in mainstream newspapers – the latter one in The New York Times. The headline was: "Signifigant (sic) rise in sea level now seems certain". Unabashed, they're still at it, even though the measurements from the period 1993–2003 indicated a mean rate of less than an eighth of an inch a year (and even that's disputed).

But hey! What's a duff prediction between friends? Just scrap the last one and make another. By the time it is proven wrong, nobody will ever remember and you'll be getting your nice comfortable pension. Meanwhile, we can all go water-skiing, in the Alps!