If hypocrisy was a religion … 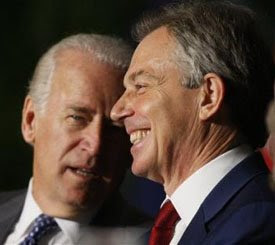 … Tony Blair would be pope. Whatever "America" might think as he led the "US National Prayer Breakfast" in the ballroom of the Washington Hilton Hotel yesterday (pictured with Joe Biden), there is no place for Mr Blair's type of religion where white equals black and black equals whatever colour you choose it to be.

His "extraordinary speech" was about "the global importance of religion", where he told his audience – which included Barack Obama - that faith should be restored "to its rightful place, as the guide to our world and its future." He also said he believed the 21st century would be "poorer in spirit" and "meaner in ambition" if it was not "under the guardianship of faith in God."

How easily does Blair, as The Guardian remarks, waft "serenely above it all".

Yet those with memories can pick any number of episodes where the man and his faith part company. Two such are particularly memorable. The first was on 10 May 2007 when the man was in his constituency in Sedgefield, announcing his decision to stand down from the leadership of the Labour Party. In a long, gushing speech, he made a brief reference to the invasion of Iraq and the "blowback since, from global terrorism". He thus cautioned that "the terrorists, who threaten us here and round the world, will never give up if we give up." It is, said Blair, "a test of will and of belief. And we can't fail it."

Then, on 27 June, he was standing in the Commons for the last time, announcing his resignation as prime minister. He started off, as had become the custom, by offering his "deep condolences" to the families and friends of the soldiers who had died since he had last spoken. He then made some general remarks about the armed forces. "I have never come across people of such sustained dedication, courage and commitment," he said, adding:

I am truly sorry about the dangers that they face today in Iraq and Afghanistan. I know that some may think that they face these dangers in vain. I do not, and I never will. I believe that they are fighting for the security of this country and the wider world against people who would destroy our way of life. But whatever view people take of my decisions, I think that there is only one view to take of them: they are the bravest and the best.

Asked whether it was time to give a timetable to bring the troops out of Iraq, Blair refused to agree. Of the terrorists, he said, "We will not beat them by giving in to them. We will only beat them by standing up to them." Equally, he refused to accept that the troops were not properly equipped. "Our troops are, in fact, extremely well equipped," he declared.

By then, Blair had already decided upon the complete withdrawal of British troops from Basra, abandoning the Iraqis to the murderous grip of the militias which, over the four years of the occupation he had done little to contain. Just over two months later, the deed was done. On the back of a tawdry deal with the Mahdi Army, to enable them to creep away without being attacked, British troops evacuated Basra Palace on 2 September.

Their retreat was redolent of a similar humiliation in Aden when, in November 1967, British forces had marched out of their base six abreast with flags flying, never to return. Then, to mark their departure, the band of the Royal Marines had struck up, Things Ain't What They Used to Be.

This time there were no bands, just Union Jacks and Regimental banners flying from a convoy of armoured vehicles as it wound its way through Basra to the last redoubt. The Mahdi Army honoured its agreement. Not a shot was fired at its defeated enemy.

As for his easy boast that, "Our troops are … extremely well equipped," in the base to which the troops had retreated, more than 450 rockets had been fired in three months. For protection, one officer said that in tented accommodation all people can do is put on their body armour and helmets and "pray" they were not hit. "The situation is far worse than is being portrayed back home," said one RAF officer. "People are just relying on luck to stay alive."

This was courtesy of the man who now says that faith should be restored "to its rightful place, as the guide to our world and its future." When this man talks "faith", like the troops that Mr Blair had equipped so well, you seriously need to pray.