Them cracks keep on growing 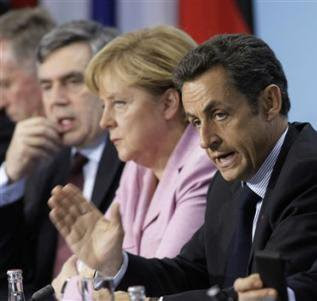 Deutsche Welle and many others are remarking on how the stresses of the global financial crisis are affecting the unity of the EU.

In particular, it makes some interesting observations on the meeting in Berlin last Sunday, "designed to forge a common EU response to the global financial crisis ahead of a G20 summit". The talks, it says, called by Germany's Chancellor Angela Merkel, were attended by the leaders of France, Britain, Spain, Italy, the Netherlands, Luxembourg and the Czech Republic, the latter in its capacity as the "rotating EU presidency".

This, of course, was not the EU and the "dwarves" are being left out. Sweden's Carl Bildt is complaining bitterly that "six to eight" EU member states had been left out of the decision-making loop.

Finnish Foreign Minister Alexander Stubb then admitted to being "extremely worried about the EU's institutional chaos," adding gloomily: "Never in the EU's history has there been a period like this with so many cliques." He goes on to say that: "This confusion is not only undermining small EU member states and the (European) commission, but the council (of all 27 EU members) itself."

This was at the General Affairs Council, where the EU commission took another knock, when the Council refused to endorse its grandiose plans to swipe €5 billion from the EU budget to fund its latest raft of pork-barrel projects.

It is quite strange how little publicity that has got in the British media, but then of course our gilded fourth estate have much more important things to concern themselves about. But this is a major setback for Barroso. The Council has not only rejected the cash grab but has also refused to accept any alternative proposals for funding the projects.

It has to be said that if the government in Britain had put up a €5 billion project, on very dubious legal grounds, and had been slapped back with not even a figleaf on which to rely, it would be all over the headlines but, once again, because it is in Brussels – even though it is our government and our money (part of it), no one wants to know.

DW suggests that the "divisions" witnessed in Brussels on Monday highlighted the EU's difficulties in remaining united "as it struggles to deal with its worst economic downturn in decades."

Furthermore, those divisions are very real. As Ambrose "Armageddon" Evans-Pritchard wrote yesterday, the Germans are having to consider financial measures which fly in the face of eurozone rules, which the commission would be hard put to oppose.

Gradually, step-by-step, the power and authority of the commission is draining into the sand.

Ambrose notes that the architects of EMU were well aware that a one-size-fits-all monetary policy for vastly disparate nations would create serious tensions over time. They gambled, he says, that this would work to their advantage.

The EU would then be forced to create new machinery to safeguard its investment in the euro. It would be a "beneficial crisis", bringing about the great leap forward to full union. We are, predicts Ambrose, about to find out if they were right.

Not a little while ago we enjoined our readers to remember the words of the 19th Century German philosopher, Friedrich Nietzsche: "What does not kill us makes us stronger." Then, we observed, if by the end of this financial crisis – if it ever ends – the EU is not a smouldering wreck, it will emerge stronger, more powerful and more arrogant than before.

It is beginning to look as if the smart money should be on "smouldering wreck".