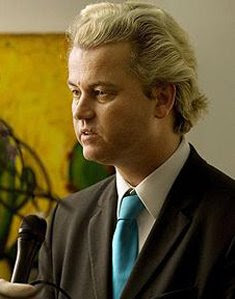 Having been writing solidly for nearly ten hours on diverse matters, suddenly to break off and look at the array on Google News is like looking at a foreign language. You know it means something, but the text blurs into meaninglessness.

The choice though, is of only one subject - Geert Wilders. And the treatment of him by this country – my country – somehow makes me feel as if I am not only looking at a foreign language but living in a foreign country. Is this really England from which he was turned away? Is this the same country which so egregiously, for so long, permitted the hate-filled preaching of Abu Hamza, before finally doing something about it?

Philip Johnston has a go on it in The Daily Telegraph, him and many more right across the spectrum. Johnston thinks that the refusal to admit the oddball Dutch MP to Britain yesterday "marks a further retreat from this country's traditions of free speech."

I agree. Any right-thinking person would.

Over and above the loathsome behaviour of our government, however, is the attitude of Her Majesty's "loyal opposition". I nearly fell off my chair when I read this. To judge from some of the comments, I was not alone.

The funny thing is that there are two parts to the parliamentary democracy that underpins our freedom of speech – MPs on the government benches and MPs on the opposition benches. Both must be effective. It looks as if, in this country, we have to do without either.

Perhaps Mr Wilders, in being turned away, had a lucky escape. We, unfortunately, are not so lucky. Time for the tumbrels.