Nearly missed this one 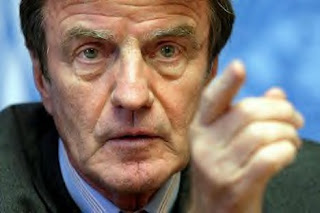 It's a good job I read David Pryce-Jones's excellent blog; otherwise I might have missed this story. Bernard Kouchner, the saintly founder of Médecins sans Frontières, the French Foreign Minister and one, whom France Soir has described (perhaps ironically) as "le chevalier blanc" is fighting for his political life.

This blog, incidentally, welcomed M Kouchner's appointment as Foreign Minister, though since that he has shown himself to be not that different from other French or European foreign ministers though, he may not be quite as embarrassing as our own Foreign Secretary. Few people are.

Anwway, back to M Kouchner. The problem has to do with a book by a left-wing journalist, Pierre Péan, entitled Le Monde selon K ( The World according to K) in which the highly regarded activist and politician is accused of using his position for his own financial gain.

Pean depicts Dr Kouchner, a former UN administrator for Kosovo, as a hypocrite for earning large sums of money as a consultant to governments in Congo-Brazzaville, Gabon and other regimes while grooming his image as a human rights campaigner. It does not claim that the doctor, who has long ranked in polls as the most popular French politician, was earning outside money while in government.

The book gives details of two companies owned by associates of Dr Kouchner, which billed Gabon and Congo-Brazzaville E4.6million ($9million) for reports he wrote on their health insurance systems. Dr Kouchner was working as a consultant at the time, between 2002 and 2007, but Pean claims he recovered unpaid debts from Gabon after May 2007.

"I never signed a contract with an African state," Dr Kouchner said. "I was a consultant for a French firm. In three years of work I earned an average of E6000 per month after tax."

The allegations carry weight because Pean, 70, is one of the most prolific and successful French investigators of political scandal. The best seller of his two dozen books is Une Jeunesse Francaise (A French Youth), which in 1994 revealed that the late president Francois Mitterrand was decorated by the wartime collaborationist government of Marshal Philippe Petain. Mitterrand co-operated with Pean, who treated him sympathetically.

Then again, they may not carry as much weight as all that. According to the latest polls, 71 per cent of those asked said that their opinion of M Kouchner remains unchanged.

Beyond maintaining that the book does not tell the truth, M Kouchner is also accusing Pierre Péan of a personal and, specifically, anti-Semitic smear campaign. This could turn into something very nasty, given recent stories of growing anti-Semitism in France.

The suggestions that this book is a way for the left and the Socialist Party to settle scores with M Kouchner who, they feel, betrayed them in his support for the war in Iraq and in agreeing to serve under President Nicolas Sarkozy and Prime Minister François Fillon are being voiced by many.

A prominent Paris lawyer retained by Kouchner, Georges Kiejman, said on RTL radio that he would probably bring a libel suit against Péan on Kouchner's behalf. At the same time, Kiejman urged a Paris prosecutor to bring libel charges, which in France can be a criminal prosecution, because Kouchner had been attacked during service as a minister.

"One takes the most popular person and one attacks him, and one hopes the popularity of the person one attacks of course will multiply the number of copies sold," Kiejman said.

Péan, joining the battle on France-Info radio, said he never accused Kouchner of violating the law, but rather of making lucrative deals with unsavory African governments not in keeping with his image as a human rights crusader.

"I do not speak of illegality," Péan said. "I worked from the perspective of ethics and republican morality." Kouchner's actions, he added, created "a distortion between what he does in general and the image French people have of him."

As for the charge of anti-Semitism, The Washington Post does not mention it but it is there in Charles Bremner's piece in The Timesrefers to the problem in the book:

Dr Kouchner also attacked charges in the book that carry overtones ofanti-Semitism. Mr Péan mocks Dr Kouchner's pride in his Jewish origins. He writes in vitriolic terms that Dr Kouchner subscribes to "an Anglo-Saxon cosmopolitanism" that detests the values of the French Republic and its
independent foreign policy.

Stalin's second purge in the early fifties was seriously anti-Semitic; the expression used was "rootless cosmpolitans". I can't help thinking the old monster lost a trick by not referring to Anglo-Saxon cosmopolitanism.

Having recently sacked his Minister of Justice because of "of the focus on her designer wardrobe and complicated love life", President Sarkozy is unlikely to be happy about another growing scandal, whatever the rights and wrongs of it might be.

In the meantime, M Kouchner is scheduled to meet with Secretary of State Hillary Clinton.