Well, now we have a problem 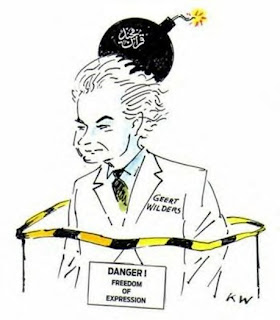 It is no longer just the Dutch; we, too, have a problem. Actually, there is nothing new about lack of freedom of speech in this country. What do you think those draconian libel laws are for? The latest development is going a little further as well as, we suspect, breaking EU rules.

This afternoon I was told that the meeting with Geert Wilders, the Dutch parliamentarian and general trouble-maker, in the House of Lords was going ahead. It was to be a private meeting at which Mr Wilders was given an opportunity to explain his point of view to invited MPs and Peers, despite the threats made by Lord Ahmed of bringing many thousands of rage-filled Islamists along.

(Lord Ahmed is, incidentally, awaiting sentencing for dangerous driving, to wit causing the death of another motorist as he was texting and receiving messages while speeding along the motorway. If Jack Straw's new rules are brought in, he may lose his peerage, if imprisoned as at least one other driver in similar circumstances has been. Then again, pigs might fly.)

It seems, however, that the Secretary of State for Home Affairs (yes, the wretched Straw Jacqui Smith again) or his minions do not think that members of the House of Lords should have the right to invite people to give them presentations.

A Dutch member of parliament facing prosecution because of his anti-Islam remarks said on Tuesday that Britain had refused him entry to the country as a threat to public security.

Geert Wilders had wanted to show a short film, "Fitna," which accuses the Koran of inciting violence, in the British parliament, but said the British authorities had told him he was excluded from the country.

"The secretary of state (minister) is satisfied that your statements about Muslims and their beliefs, as expressed in your film "Fitna" and elsewhere, would threaten community harmony and therefore public security in the United Kingdom," Wilders told Dutch television a letter he had received from the British government said.

Wilders faces prosecution by an Amsterdam court for inciting hatred and discrimination.

Britain's Home Office (interior ministry) declined to comment on Wilders' exclusion, but a spokeswoman said the government opposed all forms of extremism.

"It will stop those who want to spread extremism, hatred and violent messages in our communities from coming to our country," she said.

Uh-huh! What's the state of play on Abu Hamza a.k.a. Captain Hook? And what of Lord Ahmed who not only goes around causing death of innocent motorists through dangerous driving but threatens to disrupt meetings in the House of Lords through violence? That, of course, is not extremism.

However, the situation can become quite awkward. Mr Wilders has not been found guilty of anything (unlike Lord Ahmed) and is a parliamentarian in another EU member state. Does the Home Office have the right to exclude him from the country?

It seems that the Dutch government is not happy.

Foreign Minister Maxime Verhagen said the Dutch government would press Britain to reverse the ban and said he "deeply regretted" that a Dutch lawmaker had been barred access.

By the way, the second invitation to Mr Wilders came from Lord Pearson of Rannoch, whom this blog admires unreservedly for all his work.

Lord Pearson, who invited Wilders to show "Fitna" at the House of Lords on Thursday, said he was "very surprised that the British government should ban a European citizen — and an elected Dutch MP at that — from coming to this country."

He called his government's decision "weak and unacceptable in the extreme."

Pearson said he took exception to some of Wilders' statements but wanted to show his film "precisely to uphold his right to freedom of speech, even if we disagree with what he's saying."

He added that he would do his best to help Wilders to show his film in the UK, despite the ban.

UPDATE: Mr Wilders has announced that he will travel to Britain despite the ban. Will he be arrested and deported? Dutch politicians of all stripes remain unhappy, as well they might be.