At the end of the road … 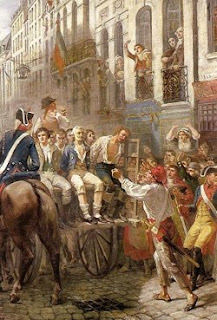 Reluctant as we are to enter the loathsome cockpit of parochial politics, it is interesting to note that Iain Martin in today's Telegraph suggests that Mr Brown's government is disintegrating.

That much is self-evident and has been true for a long time. But it is also true that British government in general has been disintegrating for some time, even before that charlatan Blair parked his rump in Downing Street. That looming presence in Brussels had a great deal to do with that – its primary objective being to undermine national governments.

However, with the decay thus evident and a general election looming ever-closer – and the euro-elections even closer - you might think that the Labour luvvies would be most concerned with their putative successors, the erstwhile Conservatives. But not a bit of it.

There are several pointers as to why this might be, not least today's YouGov poll which shows that the one subject of immigration tops the polls as the issue about which people feel most strongly.

The other pointer comes from the same poll which puts voting intentions for the Tories at 41 percent, still showing a comfortable lead over Labour, on 31 percent, and the Lib-Dims mouldering on 15 percent. What is significant though is that all three of these parties have lost share – the Tories losing three points - while the "others" have climbed to 12 percent of the vote. And, tucked in there are the BNP at four percent, with UKIP trailing at two.

Expressed on a national scale for a party that has patchy representation, that four percent for BNP probably under-estimates the appeal of the party. This is possibly indicated by last week's by-election victory in the Swanley St Mary's Ward seat, when the BNP took 41 percent of the vote compared with 34 percent for Labour and 25 percent for the erstwhile Conservatives.

Given that the Tory vote is failing to soar – despite the dire performance of Mr Brown's government – it is the performance of the BNP which is really worrying the luvvies. Thus we have Labour MEP Glyn Ford warning that the BNP could win up to seven seats in the euros, especially after the collapse of UKIP as a credible party.

It has not gone without notice that Swanley was virgin territory for the BNP and that in Bromley, a few weeks previously, the BNP narrowly missed winning a council seat by only eight votes. Yet this area is UKIP heartland, having returned two UKIP MEPs in the last euros, not least the fun-loving Nigel Farage.

But Bromley is also the scene of (one of) Mr Farage's greatest humiliations, when he fought the Bromley parliamentary by-election and achieved merely eight percent of the vote, despite spending a record £100,000 on his campaign.

Not only could BNP displace Mr Farage, Glyn Ford is suggesting that it could field successful candidates in the north-west of England, where party leader Nick Griffin is standing, and could also make gains in Yorkshire and the Humber. Ford suspects that many of those people who voted for UKIP people will be encouraged to vote for the BNP. He could be right.

The same spectre is clearly haunting Caroline Flint, currently the minister for Europe. She is warning Labour MPs and trade unions they will play into the hands of the BNP if they continue their campaign against companies they claim recruit "foreign workers" to undercut pay levels.

The fair Flint is not of course suggesting that these Labour MPs and trade unions should do anything about the problem – and nor will the erstwhile Conservatives even begin to address it. The conventional wisdom is that they should stop talking about it, and then it will go away.

Unfortunately for the luvvies, this is an issue which simply will not go away. In fact, as the recession deepens, it will become more strident and demanding, breaking into the cosy conspiracy of silence which the three main political parties have sought to foster.

This, it seems, is matched by an equal stridency from the Tribune Magazine, which is telling its readers that "the fight against the far right in Britain has never been harder – or more important."

It is reporting the "Unite Against Fascism" national conference at Congress House in London last Saturday, when more than 400 politicians, trade union activists, members of Muslim, Jewish, black and Asian groups, and lesbian and gay organisations got together "to sound the alarm about the rise of the British National Party."

The problem for these people, however, is that they cannot address the root concerns of so many people – and cannot even discuss them coherently. Their very existence and tactics therefore exacerbate the problem they seek to resolve, leaving a yawning gap which the BNP will be only too pleased to fill.

The nature of first past the post politics suggests that the BNP is unlikely to do any great damage in the general election, but with proportional representation in the euros, they could indeed make some significant gains.

And, although that does worry the luvvies, it should worry UKIP even more. Should it happen, it will spell the demise of "moderate" euroscepticism in this country and give it an altogether harder edge. For that, UKIP would bear much of the blame. Its performance over the last EU parliamentary term has been, to say the very least, lacklustre.

But the greater blame will be on the luvvies and their pretence that "Europe" and the associated issues of immigration can be safely swept under the carpet for ever and no one will notice. However, as they are about to find, these inconvenient matters come under the category, "deal with them, or they will deal with you".

Despite that, they will not deal with them, even though at the end of the road they are travelling lie the tumbrels. They are not going to be idle for ever. The BNP is merely the interim stage.