The wages of instability 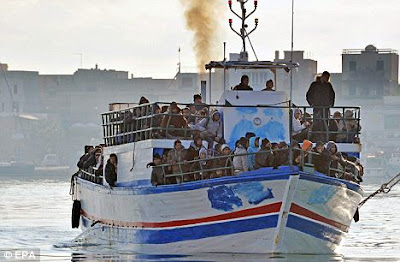 Reinforcing the well-worn saw that "no man is an island", we note with concern the wave of Tunisians who have landed on the Italian island of Lampedusa, there demanding asylum. Some 2,000 of the 5,337 who arrived in recent days have remained on Lampedusa, awaiting transfer to immigrant holding centres elsewhere in Italy.

But where it gets distinctly worrying is that interior minister Roberto Maroni is raising concerns of  80,000 North Africans heading to Europe – i.e., the territories of European Union member states. In the short term, Italy has asked the EU for about €100million following this "biblical exodus" and is asking the European border agency Frontex to launch a mission to beef up border control.

The big deal though, is that anyone being processed through this system is going to end up with rights under EU law (to say nothing of the ECHR, which is getting to be the same thing). And, from past form, sooner or later, a goodly number are going to end up knocking at our door.

There then comes the spectre of these people acquiring the right to import their spouses, children, grandparents, and even siblings and cousins. The 80,000 or so very quickly grows to about a million, and that is just the first batch. Of course, we can sympathise with Italy's plight, and in these sorts of cases, there is an argument to be made for offering aide and practical assistance. Beyond that, we should have control over what we accept and what we do not.

But, when we start seeing ranks of Tunisian asylum seekers queuing at Calais, awaiting their transport to Dover, we are going to find once again that membership of the European Union carries with it unacceptable penalties. And when are our masters going to wake up to this? Or are they going to wait for the next race riot?

We already have the murder and mayhem, so there is only that left to come.