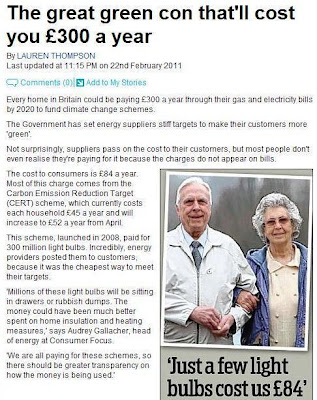 The reason, at the time, why we were bitching about the bitching was that the newspaper had not pinned down the reason for the scam and was only telling half the story. But all good thing come to those who wait. The paper is at last running the full story about the Carbon Emission Reduction Target (CERT) scheme. The headline parades: "The great green con that'll cost you £300 a year".

The Government, we are informed, has set energy suppliers stiff targets to make their customers more "green". And, as we have so often complained, suppliers pass on the cost to their customers, but most people don't even realise they're paying for it because the charges do not appear on bills.

With that firmly lodged, the paper has already told us that every home in Britain could be paying £300 a year through their gas and electricity bills by 2020 to fund climate change schemes. The cost to consumers is £84 a year, most which comes from the CERT which currently costs each household £45 a year and will increase to £52 a year from April.

So the story goes on, but the detail does not matter – to us at least. Two things here are significant, the headline and the tone. Once Middle England's favourite newspaper starts talking seriously about a "green con" and then gives chapter and verse, the greenie days are numbered and the honeymoon is over.

Basically, this confirms that the global warming religion is in terminal decline. It might have a long, long way to go before it finally slides into the obscurity it so richly deserves, but no faith-based movement can be labelled a "con" by one of the nation's best-selling newspapers and survive. Even if the politicians don't realise it yet, it's over.