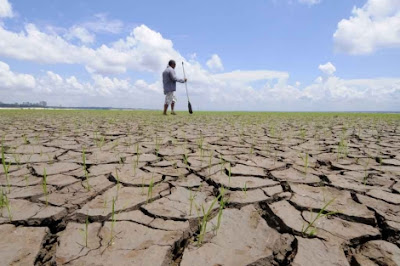 In the increasingly bizarre Daily Failygraph there is a story which its shares with its stable mates, the unloved Independent and the BBC's house journal, The Guardian. This is about the "record drought" in part of the Amazon, a hilarious contribution to the Komik Korner put out by "tropical forest expert Simon Lewis", at the University of Leeds, which he and his mates have been touting since November last. This means that his WWF paymasters can't be far behind.

The cause of this terrible drought - which is causing the trees to give off masses of life-threatening "carbon" -  is, as if you didn't already know, increased CO2 emissions. This has Lewis - who led "research" published in the ironically-named journal Science - happily dribbling: "Put starkly, current emissions pathways risk playing Russian roulette with the world's largest forest."

As a seasoned polemicist, though, Lewis covers his back by noting that, " significant scientific uncertainties remain and that the 2010 and 2005 drought – thought then to be of once-a-century severity – might yet be explained by natural climate variation." Of course, the el Nino/la Nina cycle might just have something to do with this, but you will struggle to find any mention of this.

Instead, we learn that Lewis and his little mates "are now trying to raise £500,000 in emergency funding to revisit the plots in the Amazon and gather further data" – which is of course the whole purpose of the exercise, to keep the chaps in lolly-pop money. 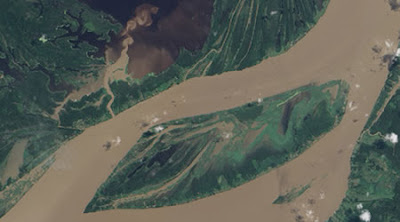 But what brings this into the arena of the surreal, though, is that the chaps are featuring Manaus and the River Negro for their horror story. They forget to tell us, of course, that in 2009, the very same area suffered from floods which were being described as the worst for 56 years. The Negro river rose to 88.32 feet, just short of the 1953 record (pictured - see also pics here). But – and you guessed it - this was "caused by climate change".

Where droughts do the damage in the Amazon is when you get a succession of them, and the soil dries out. Otherwise they are part of the normal cycle, and the forests prove remarkably resilient to them – as the likes of Lewis well know. But when funds and jollies beckon, and paymasters have an agenda to sell, any old tripe will do. Sadly, there are any number of komiks which will print it.

We then also get the BBC groupie Richard Black using the opportunity to revisit Amazongate, peddling the usual distortions with such a fevered intensity that it can only confirm the warmists' sensitivities and how much that little outing hurt them.

Thus, they keep coming back and back to it, like picking an old scab off a wound. But then they have to. Strip their little fantasy away and they have nothing. They would then have to go out and get proper jobs. That would never do. 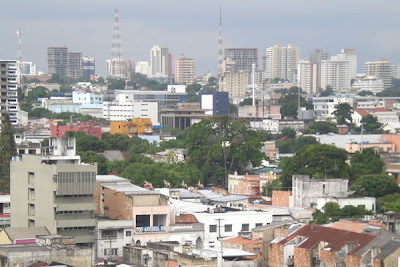 The real dishonesty of all this, though, is that Manaus (pictured above) is the state capital, and while you get the impression from carefully selected photographs of an unspoiled wilderness, as this article explores, the region is under intense population pressure, with major areas of forest clearance, man-made fires and, of course, high water usage, which adds to the pressure on resources.

As a major heat island, the city itself is contributing to the local climate, changing it from a tropical rain forest environment to a crowded urban landscape and intensive agriculture.  Lewis and his little mates will never mention this, of course. Their agenda comes first. Any pretence of science went out of the window a long time ago.