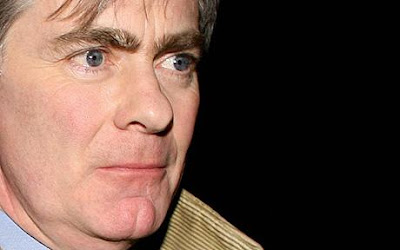 It is utterly disgusting how brave, outstanding men such as Patrick Mercer, who have served their country so well, are viciously attacked for nothing more than their slight and perfectly understandable human frailties.

We are thus mightily reassured to lean that Tory MP Patrick Mercer has had a police panic button installed in his office after, as some reports would have it (but have since been so rightly removed), he was brutally kicked in the groin, punched and kicked on the floor by his former mistress, Sarah Coyle, who works as a House of Commons secretary.

This sort of violent behaviour simply must not be tolerated, so how wise former Army officer Mercer is in having closed-circuit television cameras installed in his Commons office, at public expense. Taxpayers will be only too pleased to see their money well spent.

And with such unpleasant, dangerous people on the loose, Mercer is very wise to carry a panic alarm linked to the nearest police station and to lock himself in his office in Parliament. Only this way can he avoid another incident of the sort that might have happened but is no longer reported, thank goodness.

We learn that the MP's ex-lover and vicious attacker, mother-of-one Coyle, has reportedly been told by police to stay away from the MP – and rightly so. It beggars description that Coyle has dismissed the allegations and that both parties are said to have reported the other's conduct to police. How could anyone not take the word of such as the gallant former officer Mercer?

"Mrs Coyle kicked Mr Mercer in the groin and then kicked and punched him as he lay on the floor," an invisible report quoted one well-placed insider as saying. "Mr Mercer didn't raise a hand but he was terrified," the insider added.

But all that just goes to show what a fine, upstanding gentleman he is, and how much we are in his debt. Our heroes must have all the help they need.