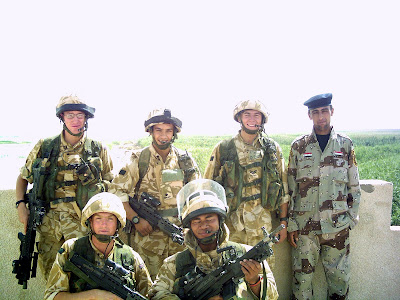 Bringing you up to date on the Pex story, I put through a bank transfer of £300 to Elaine Laga's account this morning, doted by generous EU Referendum readers through Paypal. Others have made their payments directly and Elaine will keep us informed of how the fund goes. The Regiment (Mercian) have agreed to reimburse Elaine for the £500 she paid for his appeal, and Royal British Legion case officers have finally contacted Pex, although we have no detail of the outcome.

I'm a little disappointed that other British newspapers didn't pick up the story and run with it, and that so few other bloggers covered it. Some did, like Tim Worstal, who also made a generous donation.

It's quite instructive to see who steps up to the plate, when the cause is out of fashion. I cannot recall how many "heart-on-sleeve" e-mails and other communications I had this time last year, when the "Military Covenant" was all the rage, with people imploring me to write about PTSD and other military welfare issues. But now there is no political mileage in it, and "Our Boys" can't be used as a stick to beat Gordon Brown, much of the concern somehow seems to have evaporated.

We saw very recently, the episode of long-serving Warrant Officers being "fired" by e-mail. You can bet your bottom dollar that, this time last year, the blame would have been laid at the door of Gordon Brown. Now we have Euroslime Dave squawking about it, him forgetting that he is in change now, notionally responsible for the actions of his subordinates.

Actually, the action of Major Andy Simpson does not surprise me in the least - it's exactly the sort of crass,  stupid heartlessness you come to expect from the Military, in a long line of crass stupidity that goes with the breed.

This is from the same wellspring that had "Pex" dumped, quite literally, on the streets with only the clothes on his back. On his discharge from Colchester, he should have had his personal possessions returned, but the Army could not even manage that simple task - and the fate of Pte Hewett's personal possessions is still unresolved, five years down the line.

But then, I've never been much taken with the myth of "military efficiency" - how those two words ever came to be linked is an ongoing mystery. Like every bureaucracy, there is good and bad, and that is what the Army is, first and foremost, a bureaucracy. Unfortunately, in my long and less than illustrious career, I have found that there is one constant in life: a bureaucracy is a means by which good men do evil.

For once, though, EU Ref readers have had the direct ability to undo a little bit of that evil. I thank you all.

UPDATE: The money has gone through and the cheque from the Mercian Regimental Benevolent Fund has also arrived. Radio Australia has been in touch, and the Fijian press have been running the story. Here, the media is not interested in how the Army treated this Iraq veteran.

Picture: Pex, front right, with colleagues in al Amarah - taken by Philip Hewett before he was killed in the same Snatch Land Rover where Pex sustained his injuries.