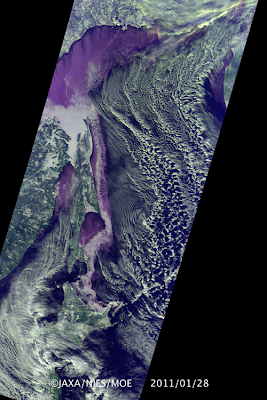 It doesn't sound much. But this website is telling is that the ice pack which is created in the north of the Okhotsk Sea and then is blown down the coast of northern Sakhalin before reaching the Shiretoko coast in the north of Hokkaido, actually arrived in Japanese waters three days earlier than the annual average – on 29 January.

Despite the warmists and their troll friends on numerous websites trying to make out that the Okhotsk Sea ice pack was perfectly normal for this time of year, this source – which relies on data from the Japanese Ibuki satellite project (pictured: enlarged view here click pic when it has loaded) – is telling us that something abnormal was happening in the region.

Ice extent reports also have to be assessed in the context of strident complaints about the decline in the icepack, which was first observed in 1989. Since then, we are told, it "has never recovered to its former levels" – except perhaps now, when it is above average for the time of year.

Certainly, while reports of two-metre ice thickness were being made, scientific modelling in the Sakhalin area seems to suggests that mean maximum annual ice thickness is in the order of 108 cm, of which 70 cm is "congelation ice" and 38 cm is snow–ice, formed later in the season when the heaviest snowfalls are experienced.

As the inquiry into the cause of the Okhotsk Sea crisis now begins to get underway, there must be some explanation for why apparently experienced skippers of major vessels allowed themselves to become trapped in the ice. Having become used to the pack coming late in the Gulf of Sakhalin, where the ships were stranded, the skippers may have been caught out by the ice arriving unusually earlier, or being much thicker than expected.