Give the mob its Bone 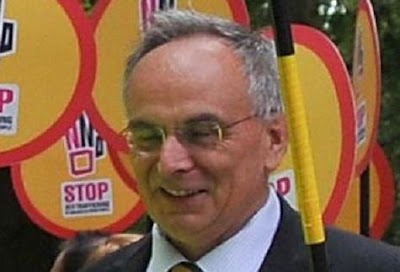 We have to offer half a cheer, I suppose, to "veteran" Tory MP Peter Bone. Described as a "eurosceptic", he has been seeking in parliament to "give the British people the right to have an in/out referendum on Britain's membership of the European Union".

This brave endeavour, which now joins the list of heroic failures such as Bill Cash trying to get his Bill passed,  on whatever it was he was trying to get passed, whenever it was that he was last doing it – if not before.

Bone is a particularly powerful qualifier for the list, having sought to add an amendment to the Tory joke European Union Bill, which pretends to give us the option of a referendum if more powers are ceded to the EU – not withstanding that every time an EU Directive or a Regulation is passed, more powers are ceded to the EU ... and we're not going to get a referendum.

What was on offer was an in-out referendum in the event of the first referendum delivering a "no" vote. This was always going to be a forlorn hope but what propels Bone to the top of that list is that his attempt was defeated by 295 votes to 26, giving the Cleggeron administration a majority 269.

Labour former minister Kate Hoey, a supporter of Bone's attempt, said the "establishment" parties "do not want the British people to have a say on whether to stay in or move out of the European Union". You don't say!

Bone and his (very few) supporters do, of course, mean well – and they give great heart to the eurosceptic mob. For that, they cannot be faulted. But one does wonder about the tactical acumen of a group of supposed politicians who have achieved nothing other than to show how weak the eurosceptic movement is in parliament - as if we did not know already.

That may not be the message they intended to give but you can be pretty sure that Euroslime Dave is sleeping easier in his bed now. Not that he probably ever gave a rat's posterior anyway, or ever needed to. Given the tactical plays with which he is confronted, he has no problems. But then, as long as the mob has got its Bone, it's happy as well.