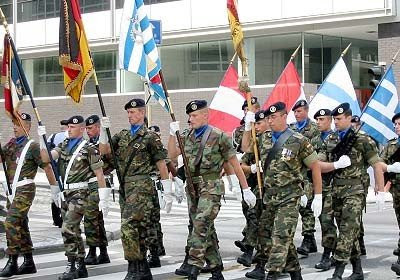 A spokesman for the British Armed Forces Federation, said: "The Conservatives made a lot of noise before the election about how they would treat the Armed Forces if they got into government but so far all this talk has proved hollow".

Of course, it was the British Armed Forces Federation – amongst others – that was flying the flag about how hard done-by the armed forces were under Labour. But now we get one defence source saying: "When Britain withdraws from Afghanistan in 2015, the Treasury will be knocking on the door of the MoD with a very big hammer – there will be a substantial reduction in troops numbers leaving an Army with a strength of circa 80,000".

Then we get told: "We will be moving into an era of sharing capabilities with our European allies. The days of being able to do everything are long gone."

And there it is ... the Euroweenies are taking over. Euroslime Dave and his European Army are on the march, with Liam Fox out in front. The Euroslime have abandoned the idea of an independent nation, with our own foreign and defence policy. Now we have to get it back - once we've got rid of the slime.