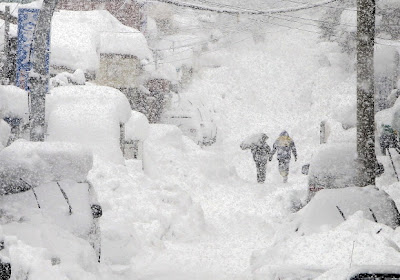 South Korea has been buried by the biggest snowfall in a century. Rescue operations are under way as approximately 12,000 soldiers have been mobilized while the country suffers through it coldest winter in years. Hundreds of vehicles have been stranded on local roads and several buildings have collapsed after more than three feet of snow fell. More snow is forecast for today.

The snowfall follows recent dramatic falls in temperatures. Record low have caused Seoul's Han River to freeze over for the first time in years. North Korea also recorded its coldest January in 26 years. One local newspaper says it's as though the region has been hit by a "snow bomb". A local resident, Park Chae-ran, says, "I am 83 years old. It's the heaviest snow in my life. I am really grateful for the soldiers’ help."