Even our rubbish is rubbish 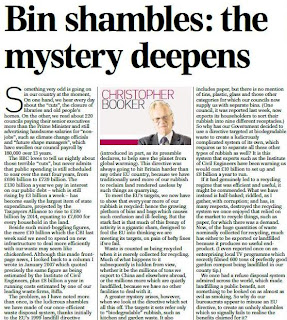 Refuse disposal is one of those issues which I find seriously depressing – on several levels. On a professional level, trained and qualified in the arcane ways of managing Britain's waste, I find it offensive that our effective and economic systems have been destroyed, to be replaced by a shambolic mess.

At a second level, my status as a taxpayer kicks in, where it becomes doubly offensive to see the waste shambles set to cost us an additional £10 billion in set up and infrastructure costs, plus an additional £8bn a year to run, all for absolutely no gain – in fact, quite the reverse, a worse system. It is difficult to know what is more offensive – that it is to cost more, or that we get a worse system for the extra money.

The third is the political level. This is one hundred percent EU law, adopted by a docile, compliant British government, while MPs sit on their hands and look the other direction. The money adds up, and in twelve years comes to well over £100bn.

Here, the pig ignorance is as offensive as anything. Slated as an environmental measure, the genesis of the current policy is, in fact, anything but. It starts in the '70s as a Single Market measure, eliminating the trading advantage the UK enjoyed by virtue of being able to dispose of waste in what we used to call controlled tips – compared to our sodden neighbours whose Rhineland territories would not allow the cheaper option.

So it is that we get a Booker lament today, under the heading of "Britain's system of rubbish collection is a marvel of waste and mess" online, and different in print.

I hadn't seen the headlines until they went up, and I might have put my oar in had I seen them. This is not about bins or collection, but waste disposal, an altogether different issue. We have a chronically bad law in the EU Landfill Directive, which is so shambolic that even our current generation of useless bureaucrats can't seem to deal with it.

So says Booker, we once had a refuse disposal system admired across the world, which made landfilling a public benefit, not something to be looked on as almost as evil as smoking. He then asks: "So why do our bureaucrats appear to misuse an EU directive, to create an unholy shambles which so signally fails to realise the benefits claimed for it?"

And that's the fourth level at which depression sets in. The question will not be answered. The issues will not be addressed, and the policy will go rolling on, as the system gets worse, more expensive and, to use that bullsquit word, unsustainable.

But it's a good analogue for a political system that's gone off the rails. When even our rubbish is rubbish, you know that we have not far to go before we reach rock bottom. Instead of doing something about it, we get witless politicians pratting about with things like double summer time, things that they should leave well alone. They should concentrate on issues that matter and need changing. That they do not tells you all you need to know.