Learning how to rebel 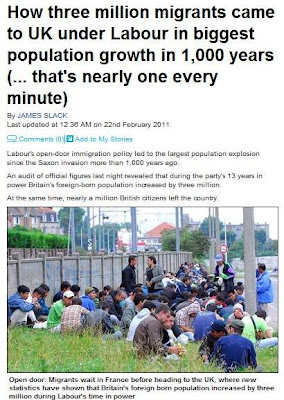 A long piece in The Daily Mail today argues that Labour's "open-door immigration policy" led to the largest population explosion since the Saxon invasion more than 1,000 years ago.

This is on the basis of an audit of official figures, which suggests that during the party's 13 years in power Britain’s foreign-born population increased by three million. At the same time, nearly a million British citizens left the country.

In recent years, migrants have been arriving at the rate of around one every minute, and that figure that does not include illegal immigrants – of whom there are around one million in the UK. That put net immigration at three million-plus extra people, equivalent to the creation of three cities the size of Birmingham’.

The implications of all this are, of course, profound, and more so given the instability in the Middle and Near East. The unrest in Tunisia, Egypt and now Libya can only increase the pressure on migration, pushing more asylum-seekers and illegal immigrants into the system. This is very much the fear being voiced in Italy, where the situation is not far from crisis point and we can start to see some serious upsets.

The real issue, though, is what to do about it, and here there is no easy answer as long as the conventional political paradigm is maintained. Anyone who has been watching the performance of William Hague recently knows full well that we are not going to get a robust expression of national interest out of this man – or from anyone around him.

While keeping a weather eye on this deteriorating situation, I am nevertheless more than fully occupied writing the book on the Battle of Britain, which is now due out on Battle of Britain day – 15 November.

And no, that isn't a mistake, and nor is the reference to the book a digression. The history of that period – the real history – shows it to have been one where the people had to fight and win the battle, while the government largely stood on the sidelines.

The myth of "the few" was introduced to support the status quo fiction of a top-down élite rushing to the support of the civilians, "a helpless passive lot, so many skins to save, so much weight of tax-paying stuff to be huddled out of harm's way", as J B Priestley put it. That élite hated the idea of an independent, capable citizenry, which would look after itself.

The point here – the one the élites, the political classes wish to obscure – is that if anything is to change in this country, it is going to be we, the people, who make it happen, just as we did in 1940, while the ruling classes were in a blue funk, skulking in their luxury bomb shelters in the Dorchester and Savoy.

This can only happen initially in a small way, as we relearn the art of rebellion – a census coming up is an excellent place to start – and one small thing can be used to build on another, until we get the message through that the people are back in charge. Then we have to decide what we do with three million uninvited guests, and the means to ensure that there are no more.

It strikes me that, to do this, we are going to have to bring back nationalism, reinvent it in a big way, and recover it from the likes of the BNP – unless we consider taking over that Party.

Either way, we have to learn how to stop being sorry for what we are – British, to take pride in it, and to make it mean something again. From small acorns do giant oaks grow ... our parents did it – they told the élites where to get off. We have to learn how do the same.