A nation of people 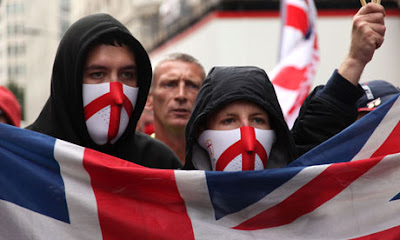 Huge numbers of Britons would support an anti-immigration English nationalist party if it was not associated with violence and fascist imagery, according to the largest survey into identity and extremism conducted in the UK. This is according to a Populus poll, reported by The Observer.

It finds that 48 percent of respondents answered their questions in such a way as to allow their answers to be construed as demonstrating their willingness to consider supporting a new anti-immigration party committed to challenging Islamist extremism. That's not the sexiest way of putting it, but perhaps more accurate.

Similarly, the majority responded in the affirmative to an embedded question which asked whether they would support policies to make it statutory for all public buildings to fly the flag of St George or the union flag.

This, incidentally, is the Populus that has its founder Andrew Cooper taking leave of absence to become director of political strategy at 10 Downing Street working directly to the Prime Minister. Perhaps he might take the findings with him and lay them in front of his new boss – not that the Euroslime Dave would be able to take them on board.

However, whatever the detail of the findings, they do lend support too a suggestion that there is room for a true, mainstream nationalist party. That is perhaps where the true political divide lies. At the moment, all three main parties are tranzie-orientated, which means that the majority of the population are no longer politically represented.

This further suggests that the main political objective must be to recover and rehabilitate nationalism, projecting it as a force for good. It has been tainted by Nazism and Fascism and the tranzies have dined off the disorder ever since.