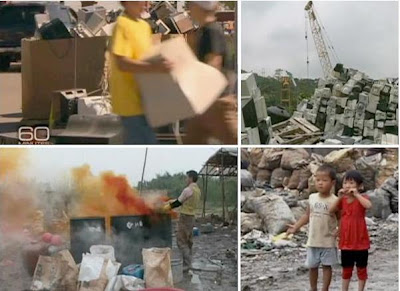 A three-year investigation has revealed that criminal gangs are shipping recycling out of the UK and sending it to rubbish dumps in the Third World. This is the result of a "probe" by the Environment Agency, which has discovered that at least thirty groups are sending material earmarked for recycling in Britain to Africa, Asia and the Far East.

We are told that this "shocking news" is set to increase cynicism about the value of strict EU directives and household recycling rules. It comes just a week after a Defra study found some UK councils are asking residents to sort their trash into as many as nine bins and are slapping them with heavy fines if they fail to comply.

A shipment of tens of thousands of broken computer and TV monitors, we are told, was intercepted by the agency on its way to Africa. If they had made it to landfill sites in the country, the electronic items, which are no long allowed in UK rubbish dumps, would have leaked poisonous metals into the ground.

The point though, is that it isn't in the least bit "shocking" in the sense of it being novel. This sort of abuse has been known for ages, and thoroughly investigated. The only thing actually shocking is that it has taken so long for the problem to be officially recognised. As for increasing cynicism, that is not possible. We met our quota there, a long time ago.

Alongside this, though – where CO2 Tech Ltd, a "publicly traded company that lured investors with claims about products and services to fight global warming", has been labelled a fraud by the US Securities and Exchange Commission, it simply reinforces our belief that the green movement is fuelled by one vast scam.

It begs for people to be ripped off, so when they are, we are not surprised. But alongside the total lack of surprise is the most profound resentment – that supposedly sensible governments have fallen for the scams and keep falling for them, while expecting us to pay for their stupidity. Now that's shocking.