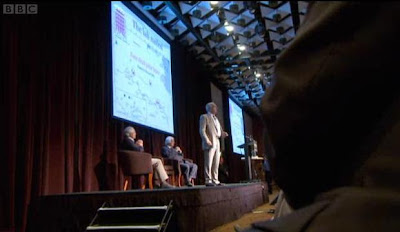 Reaction to the Monckton stitch-up goes on. There is a lot I'd agree with in this review. Monckton is not the only climate sceptic in town – he does not represent "us", whoever "us" might be, and many people with sceptic views feel uneasy about his bombast and his faux scientific certainty. But it is classic BBC tactics to pick on the easiest target, create a straw man and knock it down.

We have been here before, you know. This is the game they played with the EU/euro debate. The BBC has an unerring ability to spot the "swivel-eyed loon" and build them up. The "mark", usually with an over-inflated ego, is invariably flattered and falls for it every time. Monckton fitted the bill admirably, and the hatchet job proceeded apace.

The worst of it is that the BBC can now say it has "done" climate scepticism. It has given the issue a full airing, it will say, and now it can get back to making "proper" programmes about the effects of dangerous climate change and the need for action.

That, probably, was the real agenda. The BBC was creating its own alibi, constructing its pathway for the future where it can maintain its own myth of "impartiality", and carry on just as before. Unwittingly, Monckton has served them well - "proving" the point that sceptics are a bunch of right-wing nutters who can safely be ignored.

Incidentally, the programme is now on i-player.