The face of the enemy 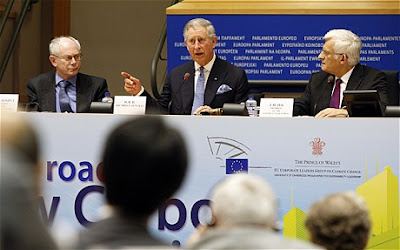 Discussing with Dellers yesterday, the idiot child of the Queen, I hadn't realised until then that his name (the child's that is) only had four letter. It still starts with a "c" of course, although some may argue about relative utilities.

The great Dellers thus makes a few observations, but even he is too gentle. What we have is the man attacking those who "corrode" the EU's environmental policies by denying "the vast body of scientific evidence" that climate change is caused by industrial activity.

This I had not fully appreciated, but here we have the heir to the throne decamping to Brussels to consort with an alien power, endorsing and defending its policies, which over-ride our own as a supposedly sovereign power, of which he aspires to be head. This man has not only joined the enemy. He is the enemy.