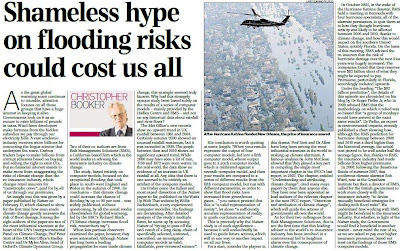 Booker today focuses on one of those groups which have a huge interest in keeping the great global warming scare alive.

This is the re-insurance industry, which charges retail insurers for "catastrophe cover", paid for by all of us through our house insurance premiums, on the retail insurance market. And, as Booker says, no financial interest stands to make more from exaggerating the risks of climate change than this sector. In a process close to market rigging, if it can talk up the specific risks of weather events, then that justifies premium hikes which can be worth billions.

One of the biggest players in this scam has been Munich re, but most of them are in it up to their armpits in one way or another. But even if they weren't, nothing by climate risk prediction financed by the reinsurance industry can be trusted as it is a direct beneficiary from elevated perceptions of risk. The industry is bent and the links take you into some very dubious corners.

Anyhow, Booker has now shone a light into another very dubious corner, this one occupied by eight authors of a paper published by Nature on 17 February, which claims to show for the first time how man-made climate change greatly increases the risk of flood damage.

Among the of the paper are two of the most influential scientists at the heart of the UN’s Intergovernmental Panel on Climate Change, Prof Peter Stott of the UK Met Office's Hadley Centre and Dr Myles Allen, head of Oxford’s Climate Dynamics Group. Two of their co-authors are from Risk Management Solutions (RMS), a California-based firm which is the world leader in advising the insurance industry on climate change, a company with interesting connections.

Booker has a very serious look at the paper, and the implications, which are worth careful study, as is the piece by Willis Eschenbach. But the bottom line, as always, is that if you want to know what is driving this scare, follow the money. The re-insurance industry is a major player, and with the billions that it has invested in rigging the results, it really should be totally unsurprising to lean where the trail leads.