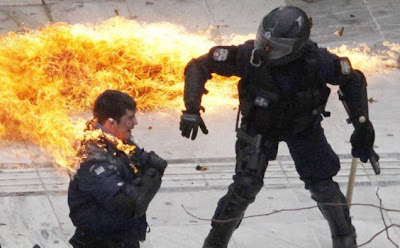 It feels almost like a race – whether I finish the book first, or civilisation as we know it collapses. Actually, this is a no-brainer. As we knew it, civilisation collapsed some time ago but, like the proverbial nails on the corpse that keep growing (but actually don't) we haven't yet noticed that the thing we loved already curled up and died.

One of its executioners is called David "Euroslime" Cameron – but there were a lot more before him. You really wouldn't like me to list them all.

What we are watching, therefore, is death throes – Tunisia, Egypt, Libya ... the collapse always starts at the fringes. But add Belgium, a country that has now broken the world record for the most number of days without a government – and also add Greece. Ireland will follow shortly, and behind that, Portugal, Spain and then who knows ... Italy, maybe. Even Germany. Dark things are happening there.

Greece, needless to say, is dead man walking, or more like live country rioting. Violent clashes, in a long line of violent clashes, broke out again yesterday - between protesters and the police. Now there's a surprise. Police have a punch-up with rioters. Well, I never.

This time, there were about 20,000 to 30,000 protesters, in two rallies that converged outside Parliament in the early afternoon. The numbers, we are told, were not particularly large by Greek standards, and the violence was moderate, if slightly spectacular if you're into police burning. But there was also the first general strike of the year, putting two fingers up to the government's austerity drive, paralysing public services and disrupting transportation.

And all this is supposed to be about reforms, but no one is really watching them any more, or really cares. Rioting has become a way of life. Soon it may become an art form, and there will be EU grants on offer to develop the genre. The money, at least, would be better spent than on the current raft of corrupt projects. Perhaps it will be called performance art – live police burning.

But when the burning starts for real we will see the contagion spread. The likes of Euroslime Dave and all those who went before them used up the patience, have used up the quotient of goodwill and, most importantly, have exhausted trust and respect. Both of those are far more potent than fire extinguishers, water cannon or armour, and when they're used up, no amount of fire extinguishers, water cannon or armour can replace them.

Better get the grant applications in – looks as if synchronised burning will be the new Olympic sport.