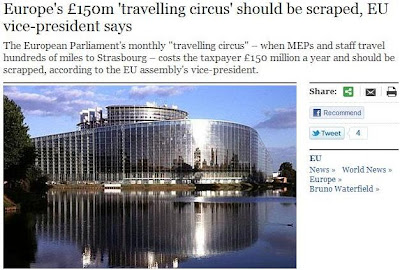 However, the headline could well be a Freudian slip, as it's one of those hardy perennials about stopping the two-ring circus of the EU Parliament, and consigning the Strasbourg operation to history. Perhaps this is Bruno Waterfield's subliminal protest at having to produce a garbage story, featuring the lowlife, Edward McMillan-Scott, for the ever-failing Daily Failygraph.

Still, it does no harm to remind ourselves that this totally unnecessary monthly trek costs £150m a year, of which the British taxpayer coughs up £28 million. That is yet another reason why we should be having nothing to do with the EU, especially as there is nothing at all we can do about it – apart from leave.

I wonder though, how philosophically, you legitimise the extortion of tax for a purpose for which no-one approves, which cannot be justified and which nobody wants to pay. And to refuse payment would be?