No Greens in the Emerald State 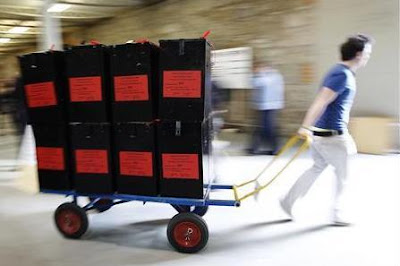 The complications of the Irish voting system mean that the results are still not fully in, and the election count is not a lot more exciting that a synchronised paint drying contest. Only forget the synchronised bit - we're saving that for the burnings.

State of play, if you can call it that, is that Ireland's main opposition party Fine Gael, looks set to take the final seats, giving it a record 75 plus. That isn't enough for a majority in the 166-seat lower chamber, so it will have to do a deal with the Labour Party which is close to its all-time record of 33 seats.

The greatest joy is that the Greens have been totally stuffed, losing all their six seats. It's funny how it works that way. They do alright until they get a bit of power – then people realise how absolutely crap they are, and they never get another look in. That's what's happening in Germany.

Happily Fianna Fail was set for a record rout with just 14 seats and Sinn Fein, best known as the political wing of the now-dormant Irish Republican Army, is close to trebling its 2007 election result with 13 seats. Some 14 seats have gone to independents.

Whether any of this makes any difference at all remains to be seen, but at least we don't have to look at Cowen any more ... until he turns up again with a nice little earner, courtesy of the "colleagues". A napalm sandwich would be a better idea, but then these people never get what they deserve.