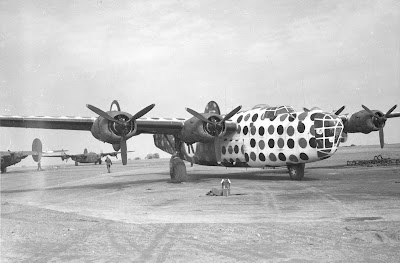 One link I intended to put up the other day, and never got round to it was this one, from the blog Nourishing Obscurity. It takes on an issue close to the heart of this blog – the "false prophets" of Hannan and Carswell, and their increasingly untenable positions as faux eurosceptics and members of Cameron's not-the-Conservative Party.

The Judas Goat meme is doing quite well, with several spontaneous references to it on Hannan's blog comments. The "golden boy" is losing some of its shine.

And in case you are wondering about the pic, it's a "Judas Goat" – a USAAF B-24 in high visibility colours that was used as a formation leader, for bombers to formate on before they set off on a mission. Once the formations were set up, the "Judas Goat" would bugger off back to the safety of the base, while the rest of the bombers would fly on to face the slaughter of the German guns and fighters. 'Bout right for Myrtle, methinks.