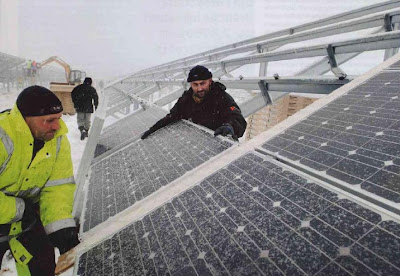 March last year, I was railing against the madness of Feed-in-tariffs (FIT) for solar power, with a particularly vitriolic word (or two) for the Tories. My singular grief with them was that they had taken the Labour scheme to fund solar power to the level of two percent of national capacity and demanded an increase to 15 percent by 2020.

Thereby did they in one fell swoop elevate madness to rabid insanity, adding not £80 billion or so to the capital costs of our electricity system but, potentially £600 billion, recoverable by the suppliers from the FIT which, by 2020 could have reached £60 billion a year.

As it turned out, the Tories may be stupid – exceedingly so – and dishonest to a degree scarcely imaginable, but they are not (yet) certifiably insane. Faced with giving a blank cheque to the solar providers, last November they sneaked in a cap on payments. This was estimated at £400 million for the period 2014-5 but even that has been cut back to £360 million under the comprehensive spending review.

This is still £360 million too much – real money added to our electricity bills, but it is a far cry from the £60 billion a year the Tories were calling for when they were in opposition – proving once again that politicians will promise the moon in order to get power and then lie through their back teeth when they get it.

But, there is some joy to be had from The Guardian squealing with indignation that the now-capped "green subsidy" that was intended to pay homeowners, schools and community groups for installing solar panels, looks as if it is going to be sucked up by an increasing array of industrial-scale solar farms, run by thieving capitalist pigs.

What has one beating head against wall in despair, though, is the reaction of the Guardian on learning that its fluffy greens are to be deprived of their muesli money from their "microgeneration", complaining that: "What no one seems to have predicted is the emergence of large-scale solar farms". Doh! Are they really that thick? Are they that ignorant? Don't they know what happened in Germany, where Frau Merkel is rowing back on the FIT as fast as her greenie partners will let her?

Still, at least The Guardian is now admitting that FIT is a "subsidy", which it seems happy to do, now it is going to capitalist pigs instead of tofu-knitters. But one still marvels at the idea that greens can be quite as stupid as they appear to be. Still, there is hope for us yet as the judiciary must surely now stop them breeding.