Europe: voices from the grave 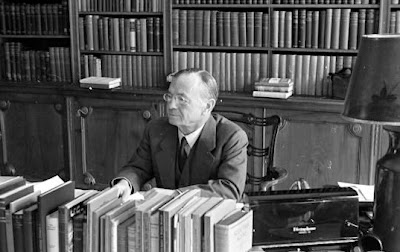 What is quite remarkable about the "Europe" debate is how long it has been going, the extract below from a paper submitted to the War Cabinet on 12 November 1942 by Leo Amery, then India Secretary. Even at this time of the war - and in fact from a much earlier date - there had been a wide-ranging debate within the War Cabinet about the shape of post-war Europe, and Britain's role in it.  And, nearly 70 years ago, how familiar these arguments are:

"An actual federal scheme for Europe as a whole, involving a surrender of sovereignty to a central Government, is hardly conceivable. But a looser union, more akin to our British Commonwealth, is at any rate within the bounds of possibility. It might be based on such things as a common declaration of civic and cultural rights for all the inhabitants of Europe, a common standing European Conference, mutual economic arrangements as regards currency, tariffs, railway and air communications, and, possibly, a common Air Force to keep the European peace and a definite undertaking by the member States to send military contingents to help enforce it.

What elements would such a European polity comprise? Obviously, if it is to be a voluntary association, it may not include the whole of the Continent. Spain and Portugal might possibly prefer to stay outside and foster their relations with South America, now only a few hours distant. Norway, and possibly indeed the whole of Scandinavia, might prefer to work more closely with the Anglo-Saxon Powers, to whose political outlook and social conditions they are so closely akin.

On the other hand, if the basis of the future European structure is to be not only material interest, but a common European patriotism, a sense of Europe as something characteristic and worthwhile for its own sake, it must clearly not include elements of an entirely different cultural character, with dominating interests outside Europe, or inspired by a patriotism that is not centred in Europe. From that point of view neither Russia nor this country can become actual members of a European polity without destroying its whole effectiveness.

Russia is essentially an Asiatic Power whose centre is steadily shifting eastwards, and its whole tradition is essentially different from that of Central and Western Europe. We belong to a world-wide Commonwealth which, after our own island, has the first and instinctive call on our patriotism. We can play an indispensable part in getting the New Europe started. When it is started we can play a no less important part, as the link between it and America, perhaps also as a mediator between it and Russia.

But we cannot be an actual effective member so long as our main interests, our primary obligations and our instinctive loyalties are concerned with our partners in the British Commonwealth. Still less would Canada or Australia wish to become a part of Europe. We, the British Commonwealth, can no more be an actual part of a United Europe than we can be a part of the United States or of the Union of Soviet Socialist Republics. We have a greater future before us than any of these other groups and a greater contribution to make to the peace of the world."