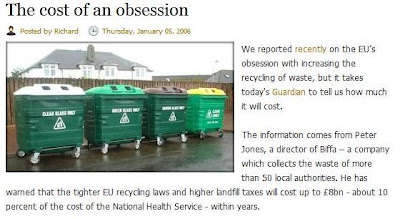 Spread all over the front page of The Times (no link) was the putative cost of the defence equipment being junked – nice cuddly things like Harriers and the Ark Royal, all at £12 billion, putting us firmly into the third-rate. Yesterday, I pointed up other areas where saving could be made, but on this particular figure it is interesting to see the near-symmetry with another figure, the £10 billion required to finance our waste policy.

This is taken up in detail by The Independent which tells us that the CBI is calling for a "coherent waste policy", to make sure Britain is making the most of its rubbish.

Reading into this, we see the CBI arguing "in the context of 300 landfill sites set to close in the next 10 years, and the need for 2000 new waste management facilities to replace them, at an estimated cost of £10bn". Missing, of course, is the magic elephant words, the European Union. But as we know, the closure of these sites is entirely due to EU law.

But what struck me particularly was the figure of £10 billion. It looked familiar, and indeed it was. That was precisely the figure I tracked down in January 2006 - a little blog bleating away about an amount of money so absurd that no one took any notice of it (pictured).

I found this a lot when I was dealing professionally with regulatory affairs. Warn people too early about a new set of regulations or other impost and they will not respond – it is too far ahead, too unreal. It lacks impact. You have to wait until the threat is closer before sounding the alarm. The trouble is, by then, it is often too late.

So here we go. Five years ago was too far ahead. Five years later, it is that much closer and now the CBI is touting the sum. But, alarmingly, it cannot see the absurdity of closing down our holes in the ground and spending £10 billion for their replacement ... then cutting up £12 billion of our defence equipment, presumably to put in holes in the ground that we haven't got any more.

It is our fate, however, to be too far ahead too often. It struck me that if we shut the blog down for a couple of years, our competition might just have caught up with us. But that's clearly not that case with The Independent and the CBI. For them, you have to wait five years - and they still don't get the point. But the really big joke here is that our original source was The Guardian. All these years and we end up virtually where we started.