A smile passed my lips 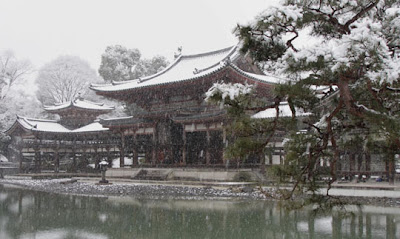 In normal times, this piece wouldn't get a look-in, although it does have a certain interest, with the headline: "Heavy snow forecast to continue in wide areas". What really makes the story though is the picture.

As for the detail we learn that snow covered the city of Osaka on Friday for the first time since 2008, shutting down highways in Osaka Prefecture and Shikoku. The Meteorological Agency warns that snowfall through today in wide areas of Japan could cause traffic disruptions and accidents.

Heavy snow is expected even in relatively dry flatlands on the Pacific side of the country, and after light snow Friday night, heavy falls are forecast for today, the agency also says. But what is really interesting is that picture.

Anyway, in the Kinki region, snow starting falling Thursday night, including in lowlands. Osaka had two inches and Nara had over four by 1 pm. Friday. Both directions on the Hanshin Expressway in Osaka Prefecture were closed, while part of the Hanwa Expressway that links Osaka and Wakayama prefectures was also shut down.

But what is really interesting is that picture.

Some highways in Shikoku, readers will also be interested to learn, were blocked on Thursday night. Train services on the JR Wakayama Line were temporarily suspended due to a snow-caused glitch at Takada Station in Nara Prefecture, while trains were cancelled and delayed elsewhere in other parts of western Japan.

And apart from being fascinated with that picture, they might also be intrigued to know that eight inches of snow is forecast for the Chugoku region through today, and that lightning and strong gusts is predicted for the Sea of Japan off the Sanin region.

So what's so special about the damn picture? Ah! it's the Byodoin Temple, a World Heritage site in Uji, Kyoto Prefecture. Snow in Kyoto! Kind of neat, eh?