Grovelling in the weeds 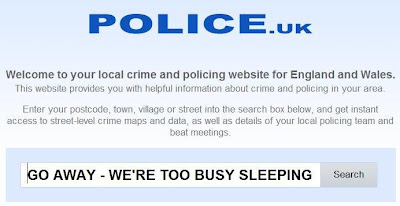 If you had a site that had four million people attempting to log on at a rate of 75,000 people a minute, I guess you would be mightily pleased. But, seeing as it was a public service website - showing the locations of reported crimes - the server crashed.

From this, one can deduce several things. The first and most obvious is that, despite being the most expensively funded online content suppliers in the world, the public sector remains totally useless at managing its own websites – possibly even worse than The Daily Telegraph.

Secondly, it shows how much online traffic is generated when an issue is well-publicised and it is of public concern. A flow rate of 75,000 a minute is pretty good by UK standards.

Mind you, there is nothing to say that all were UK residents, or that they were actually genuinely interested in their local crime statistics. The top-scoring comment on the Mail website asked why Downing Street was not on the list, while the second-best rated comment (from a reader in the Netherlands) noted that it "should be at the top off the list for sure as they have been robbing us for years!!"

The third point is more sombre. For this blog to get 75,000 hits in a week would be exceptionally good (although we have done better). That a site can get that much traffic in a minute, and on its first day of business, suggests that we might have a little way to go before we reach our full potential. We are still grovelling in the weeds.