The joys of democracy 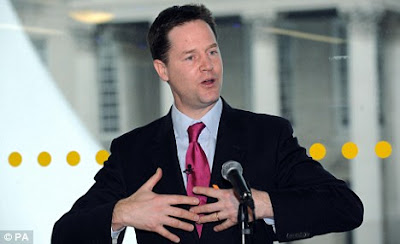 I had an entertaining few hours yesterday discussing diverse issues with an MP. Nevertheless, it troubled me to find him displaying the usual naïvity of the elected official, in extolling the virtues of the "democratic" system of elections which had brought him to office.

In the cut and thrust of the discussion, I cannot quite recall how we came to be rehearsing this precise issue, but it may have emerged after the said MP had raised the idea of elected judges – elections being his idea of ensuring that officials were "accountable". Unless I am thoroughly mistaken, he seemed to have some vague nation that the process of election confers accountability, and was a superior form of achieving this desired state.

Remarkably, our man seemed unconscious of the irony that that the electoral system, of which he had been the beneficiary and of which merits he was extolling, had delivered the Cleggeron administration. This is the very same which has so exercised The Daily Mail that it today handed over its front page to the headline: "Makes you proud to be British".

And just in case some of its readers don't do irony, the message is hammered home with Richard Littlejohn likening the performance of the Cleggeron duo to something out of a Carry-On film. The real irony, though, is that "British" is the last thing a tranzie like Clegg would want to be thought of.

Nevertheless, the only thing one can hope for is that very few people are surprised. It should have dawned on just about everybody by now that PR spiv Cameron and his golden-boy Cleggy are not very good at politics and even less good at anything which resembles competent administration. Thus, that they should be guilty of "shamefully mishandling" the Libyan evacuation mission is only to be expected.

The sad thing, of course, is that the Euroslime Dave was elected leader by the Tory Party, in what was said to be the most democratic contest in its history. Through this we end up with a man pretending to be prime minister, heading a party that was not voted to power, who is neither accountable nor democratic, and who is supremely incompetent.

One might recall incidentally, that the 1940 Churchill was in a similar position, heading an unpopular coalition government, presiding over an emasculated parliament. However, Churchill had some advantages. Rather than Miliband, he had Hitler as an enemy – by which comparison even the British government looked benign - and he enjoyed rigorous media censorship which allowed him to keep his more egregious errors out of the press.

Neither that nor this period was any great advertisement for democracy. But then, as Churchill once said, it is the least worst system – even if during the period of his greatest fame, he almost completely abolished it and ruled with greater powers (on paper) than even Hitler.

Maybe though, if he was right, we ought to try it some time – because, elections or not – what we have is not even close. On the other hand, that is just as well. Any system which throws up the Cleggerons as our rulers has to be all bad.