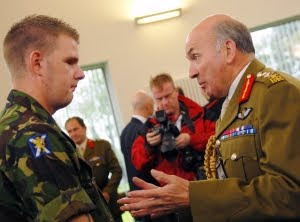 Reflecting precisely a comment on our forum, we have Lt-Col William Pender (rtd) in the letters column of The Daily Telegraph today, making the essential point about the war in Afghanistan: either we fight it properly, or not at all. More specifically, he writes:

The fundamental question, both for the Government and for Nato (if it is to remain a meaningful alliance), is whether defeat of the Taleban and establishment of a stable, long-term democracy in Afghanistan really is a vital interest.

If it is vital, then since national security is the prime duty of any government, whatever it takes in manpower – but primarily willpower – from all Nato member nations, must be allocated to fulfilling this aim. If this means putting economies on a war footing – fine.

If, on the other hand, these aims are merely desirable rather than vital – and with governments led by politicians with no personal military experience, and more concerned with interest rates, credit crunches and unemployment – why, let them say so.

Then the nations that contribute combat troops can resign themselves to long-term attrition of their soldiers committed to an unwinnable war.

For "attrition", read feeding troops into a mincer, sustaining a never-ending toll of casualties for no strategic effect. In such a battle, with our small, expensive Army, we can never win against the unlimited manpower of the Taleban, sustained by a never-ending supply of young men from the North-West frontier. Even at an exchange rate of 1000-1 in our favour, we cannot win.

Iain Dale notes that "politics is upside down" when Sunny Hundal supports the war and EU Referendum says we should withdraw.

For the record, we support the war. But that support is conditional on it being prosecuted effectively, with clear objectives and some prospect of success. None of those conditions currently apply.

In our overnight post, we write of the tragic episodes where three foot patrols in Sangin in the space of just over a month are confronted with the same type of complex IED ambush, each suffering multiple casualties in exactly the same circumstances.

On a smaller scale, the Army response seems to mirror the tactics of the First World War when the Generals, having experienced the carnage of sending troops "over the top" to face the German machine guns – to be slaughtered in their tens of thousands - hit upon the new, "war winning" tactic - of doing exactly the same thing again.

In terms of this war, it is not the machine gun but the IED which is the decisive weapon. And, as in the First World War, we see an Army which is completely unprepared, both physically and intellectually, to deal with the threat.

Faced with the endless attrition arising from sending men out on foot patrol to confront IEDs which have been manufactured and emplaced on an industrial scale, the Army's tactic is simply to do exactly the same thing again, and again and again. We are not alone in being less than impressed with what passes for Army tactics.

The point is, of course, that the Taleban's use of the IED was expected and predicted - back in June 2006, when we arranged through Ann Winterton for the defence minister to be asked what he intended to do about it. The answer was not reassuring.

He calls for his troops to be given better "technical" equipment to locate the devices and catch those responsible in the act so they can be eliminated and we are told that the General "has been forced to endure reports of death and injuries inflicted on those under his charge" by IEDs.

"IEDs are a critical issue at the moment. We need more technical equipment to have 24/7 surveillance and the ability to target these people and kill them, if necessary, when they are laying these devices," he says.

The (rhetorical) question is, where was Dannatt three years ago when the threat was being predicted but had not then materialised? Well, as we know, this "honest general" was obsessed with the Future Rapid Effects System (FRES).

Interviewed by RUSI in Summer 2006, he spoke of having "won the argument for the medium-weight equipments," predicting confidently that "we will have them." Even then, with "roadside bombs" ripping the heart out of his army in Iraq, IEDs were never mentioned.

With the Army three years behind the curve, there can be no "swift" retribution. It will take several years to devise the necessary countermeasures, equip and train the troops, deploy the equipment and introduce new tactics. The consequence is that, in the interim, the Army must cede the tactical initiative to the Taleban in order to minimise casualties, or sustain losses which would make continuation of the current campaign unacceptable.

The alternative, as Lt-Col William Pender writes, is to put the UK on a war footing, injecting massive resources into the campaign to overcome the years of neglect. If we had any confidence that this might happen, either under this or the next administration, then our view of the war would be different.

Devoting the necessary resources, however, is as politically unsustainable as bearing the current casualty rate. Brown is not going to do it, and neither is Cameron. For want of that, therefore, we must withdraw. There is no way out, other than to resign ourselves to long-term attrition of our soldiers committed to an unwinnable war.

And that simply is not acceptable.