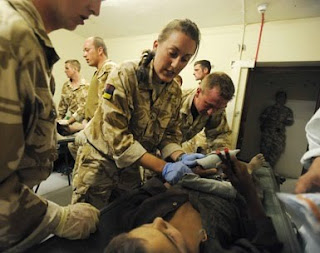 Inward groans have to be suppressed as we read more ill-informed opinion, dressed up as analysis – this later helping from William Rees-Mogg in today's Times. Thus does he reach down to us lesser mortals to deliver ex cathedra pronouncements on the Gray report, offering nothing but the most profound ignorance.

Fortified by this ignorance, the Great Man identifies "three collisions" in the core debate over defence planning. The first is the collision between the wars started in the Blair-Brown regime and Mr Brown's refusal as Chancellor to spend money on fighting them. The second, he says, is also financial – the "defence black hole" created by Labour.

For his third "collision", Rees Mogg chooses "inter-Service rivalry", accusing the MoD of being more concerned to find huge funds for two aircraft carriers and a replacement for Trident. This, he avers, would give priority for expenditure on weapons systems we are unlikely to use rather than the weapon systems we are actually using in combat in Afghanistan.

We could, of course, ignore Rees Mogg and his vapourings, except that his formulaic analysis reflects the general tenor of the debate, in the media, amongst the political classes and elsewhere. Each time the monster lifts its head, therefore, it must be slain.

For convenience, if we accept Rees Mogg's three "collisions" at face value – which we do not as they are far too simplistic – his huge error is to stop with three. No one can even begin to understand the defence issue until they appreciate that there are many more.

Firstly – about which we and so many others have written before, so many times – there is the "collision" over the very nature of warfare, the tension between the need to fight the present, low intensity wars – which we expect to be fighting for the foreseeable future – and the "future wars", defined as inter-state wars against technologically equivalent enemies.

It is that "collision" which has in fact dominated the defence debate, and it is one that is not only reflected in inter- but intra-service rivalry, with strong differences of opinion, within the Army especially, as to the shape of future requirements.

Overlaying that is yet another "collision", the tensions between the requirements for the core of the "liberal intervention" ethos, manifest in the air-portable rapid reaction concept from which FRES evolved, and the need for this to be able to assume a multi-function role, also fighting the low intensity and the inter-state wars.

At the heart of the defence debate, therefore, lies confusion and disagreement. Parroted by Rees Mogg, Gray asks: "How can it be that it takes 20 years to buy a ship, or aircraft, or tank? Why does it always seem to cost at least twice what was thought? Even worse, at the end of the wait, why does it never quite seem to do what it is supposed to?"

The answer is actually quite simple. Neither the successive defence chiefs nor their governments could never quite make up their minds what they really wanted and, more, importantly, have evaded coming to terms with the singular fact that we are no longer a major global power and cannot afford everything.

In those terms, there is not so much a procurement as a definition problem. We end up with massively expensive kit which never seems to do what it is supposed to do because no one can quite decide what is required to do. Then, by the time it comes into service, the goal posts have moved, as indeed they have done throughout the project developments.

To make matters worse, in the context of the operations in Afghanistan, there is yet another "collision", the doctrinal conflict between the role of mobility and armour in securing protection, visible in the distinction between the Jackal on the one hand and the Mastiff on the other. With the government trying to please advocates of both schools, it succeeds in pleasing neither.

If one then adds and stirs well in portions of bureaucracy, corporate inertia, incompetence, pork-barrel, graft and plain stupidity, one begins to get close to understanding something of why defence spending is in such a mess. Sorting the mess has, as we have been wont to observe, defeated the best and some of the worst minds since the war, and long, long before that.

Turning the issue into a political football, therefore, helps no one. Nor does the trite, formulaic analysis offered by Rees Mogg. There is going to have to be a much better-informed and honest debate than we have seen so far.

In that, again as we have previously observed, defence is very much a litmus issue. The difficulties encountered here are by no means unique and lessons learned could so easily be applied across the broad spectrum of government. In this case though, there is more than usual pressure to get it sorted. This is too important for games. We need to get a grip.