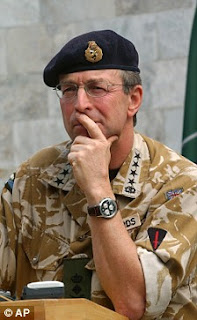 Headline of the day is the prediction from the incoming Chief of General Staff, General Sir David Richards, that Britain’s mission in Afghanistan could last for up to 40 years.

This finds its way onto the front page of The Times drawn from an exclusive interview with the man in the same paper, and then copied out in most dailies.

The interview itself is disappointingly thin, majoring on hagiography and personal detail, giving very few clues as to how Richards intends to operate as CGS. We gather he is a "man of action" and that he is "politically savvy" and that he is not going to present a "shopping list" for military equipment on his first day in office.

But clues there are that he is going to be a very different CGS from his predecessor Gen Sir Richard Dannatt. The immediate difference is that while Dannatt went to Sarah Sands of The Daily Mail for his first interview, while Richards goes to The Times.

Another major difference is that Dannatt used the opportunity, in October 2006, to call for a withdrawal from Iraq, thereby giving sustenance to the emerging Mahdi Army, which then knew that it could win the day as long as it kept up the pressure.

Richards, on the other hand, is borrowing from the same strategy of building up the host country security forces, as "our route out militarily", but then adds that Afghan people and our opponents need to know that this does not mean our abandoning the region.

"We made this mistake once," he says. "Our opponents are banking on us doing it again, and we must prove them wrong." Reading the runes, that is a tacit, if highly camouflaged criticism of his predecessor. It is also tactically sound. You should never concede the game openly, even if you do intend to quit.

Our new CGS, we are told, is a man who is also committed to Afghanistan, and determined to win, even if that can only be defined as not losing. His prediction of a 40-year war, therefore, needs to be taken with a pinch of salt. He is simply talking the talk. But we may also have a man who can walk the walk.