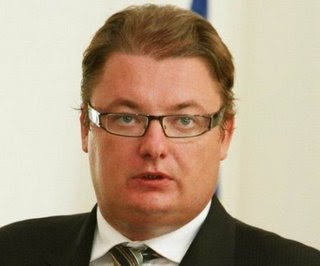 Ever since the Tories broke away from the EPP group in the EU parliament and formed their own, critics inside and outside the party have been seeking to exploit apparent inconsistencies between them and their "partners".

So tedious are these little scraps that we have avoided reporting on them – who really cares about the internal politics of the EU parliament, much less the machinations of a fringe group like the Tories?

The latest twist, however, has a certain amusement value. As reported by The Independent, the president of the new group, Law and Justice Party MEP Michael Kaminski (pictured), has expressed support for both the Lisbon Treaty and the Common Agricultural Policy.

This, says The Independent, "would appear to put him seriously at odds with David Cameron who is strongly opposed to the treaty which he wants to put to a referendum in the UK."

Actually, it doesn't – which goes to show how little the British media understands EU parliamentary politics.

The political groups – including the one which the Tories have formed – are little more than "marriages of convenience" between disparate national parties, with very little in common. They come together at the EU level in order to milk the system, enabling them to maximise their drawings from parliamentary funds and to bid for key positions in the parliamentary structures.

Look at any of the political parties forming any of the EU groups and you will see huge national differences in policies, to the extent that you could play endless games pointing up the anomalies and inconsistencies. They matter not though.

All the group members sign up to a set of common principles, in order to satisfy the parliamentary rules, carefully drafted so as not to interfere with national sensibilities. Each national delegation then tends to run its own affairs.

Since the EU parliament has absolutely no control over EU policy, which is determined by the commission and the European Council, national policy differences between group members are of very little importance.

However, playing up the differences in order to score political points on a national stage is fair game. Thus, Baroness Kinnock is doing her own"milking", declaring that: "David Cameron needs to get a grip. The fringe is coming apart at the seams." She goes on to say: "Cameron and Hague must say where they stand. Do they agree with the leader of their group or do they oppose him and move further from reality?"

Outside the foetid bubble of micro-EU politics though, one suspects no one actually cares. After all, Kaminski is a foreigner, and who cares what they say anyway? For goodness sake, just look at him. He cannot even wear his tie correctly.