The hand of the censor 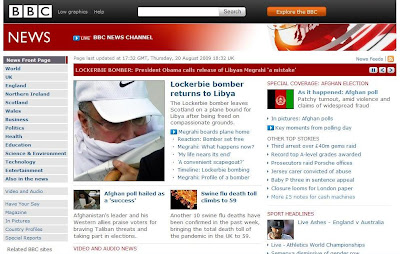 To my certain knowledge, whenever an RAF aircraft crashes, it is news, even if the crash is an accident. And, under normal conditions, the BBC agrees, giving the accidental crash of the Tornado in Afghanistan in July full coverage. Even training accidents in the UK are fully reported.

But, having just watched the BBC main evening TV news, with lengthy coverage of Afghanistan, one could not help notice a rather striking omission – there was absolutely no mention of the downed Chinook. A British helicopter gets shot down by the Taleban and this is not news?

The incident was covered briefly by the BBC website when the story broke early this morning – before it was known that the helicopter had been shot down. There has been no update and the link to the original story is now dead. The lead story on the website is "Afghan poll hailed a success".

No one is going to convince me that this is accidental. A clue as to what is going on comes from The Guardian which reports that the Afghan government had ordered a "clampdown" on reporting poll violence.

It also cites a BBC spokesman saying that it would proceed with its plans for covering the presidential election. "We have a duty to our audiences to report on the situation in Afghanistan fairly and accurately, and we will continue to do so," says the spokesman.

Indeed the BBC does have that "duty", but with the hand of the censor so rampantly obvious, it is very clear that the term as interpreted by the BBC is highly elastic. This is not healthy.