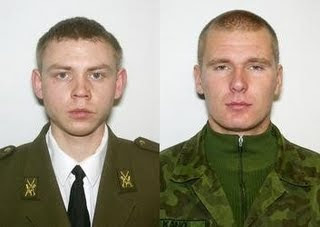 The Ministry of Defence is quick to give us personal details of the British soldiers who die on its behalf in Afghanistan (207 to date), writes Christopher Booker. It is more reluctant to explain why many of them are being killed in a nasty little insurgency war which, too often, they haven't been given the proper equipment to fight.

Last Sunday, however, the MoD remained silent about the deaths of two young Estonian soldiers, Eerik Salmus and Raivis Kang, although they were clearing a road of explosives alongside British troops as part of a unit integrated into British command, performing tasks which otherwise would be putting our own men at risk.

Britain is still honoured in Estonia for the crucial part the Royal Navy played in 1918 in helping that gallant little country to win its independence from the Bolsheviks. Several dozen British sailors lie in a Tallinn cemetery where their graves are still lovingly tended. The MoD should give our Estonian allies similar respect.